I wrote my first blog post here about Gail Benoit in 2007 - so 14 years ago and I started the website shortly afterward.  It always bothered me that when you googled her name nothing bad came up about her so if people were doing their due diligence and trying to find out if she was selling healthy puppies - they didn't have any way to find out because there was nothing out there about her.

I have always loved the internet for certain things and one of those things is that everyone has an equal access to technology if they choose to take advantage of it.  When I had my very first iteration of my first website - it was on Geocities - anyone remember that?  And it was pictures of my dogs Charlie and Leonard playing around Halifax and it was called "Charlie and Leonard like to play" but it had a couple extra pages on it and one of those pages was dedicated to a man named Peter Duffy. Remember him?

He was a columnist at the Chronicle Herald and he hated dogs - and specifically he hated pit bulls - and every time he wrote a column laying out his very dangerous hate for the species I love more than any human - I would put my letter and his column on that page - most of my letters did get published in the paper as well - I have a good result when I write letters which makes me happy :) - but the fabulous thing about the internet - even back at the very beginning is that it was called the "web" is that it is constantly indexed - constantly scrawled - so if anyone ever tried to google Peter Duffy - what happened?

My little page would come up in the search results - and usually it came up in the top 10 results even - so everyone became aware that Peter Duffy hated dogs - and that made me happy.

So I was aware that it was important for there to be a web presence in 2007 for Gail Benoit - she had acknowledged in court under oath that she had sold more than 13,000 puppies and she had no plans to stop - and I had the technology and knowledge to help people make some decisions - and that's what I did.

NOTE HERE - if you do not own the domain name for your name - you should buy it.  Now.  Or someone else might.

So I went out and bought the domain names for her name, her husbands name and her company - at the time - and I set up a website that was a clearinghouse of every news article I could find and every blog post I had ever written - I did not put any kind of extra information there - except for information about parvo in case customers of hers who had landed there late at night searching for answers needed some quick links needed that information - and the Gail Benoit website was born.

At the time it was a static website but I have since moved it to blogger so all it costs me now is the price of a yearly domain name - for the first 10 years it cost me about $120 a year. 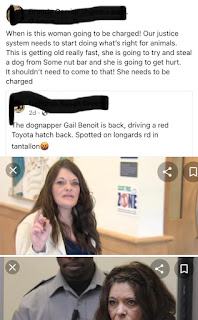 But now we've come to 2021 - I'd say that you'd be hard pressed to find a Nova Scotian who has never heard of Gail Benoit - and if you want to know the truth - she is not the problem here in Nova Scotia - she has not been able to buy or sell any companion animal for the last 4 years - she is still not allowed to sell any animal until January 2022.

Since she's had a prohibition on owning or selling any animal a whole industry has opened up in Nova Scotia that is truly much worse than anything she ever did in the 15 years she was in business - and there are other dog brokers operarating in business right now today - Oops Puppies probably being the most well known - but there are others - I consider every importing rescue to be no better and no less than a dog broker - that is for sure.

So because of this I am shutting down my Gail Benoit website - it's almost every day that I see posts like this - people saying that she should be dead, should be in jail  - for what - for existing. 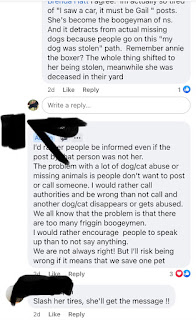 And I'm not willing to be a part of it anymore.

In 2007 it was a good idea.  In 2021 - I'm not willing to be a part of it anymore.  Sorry - I have been bullied, gaslit, told I should kill myself too many times to be part of something that produces the same results.

So the Gail Benoit website is a thing of the past.