Leptospirosis outbreak is all through the HRM

Be careful about taking your dog out in public right now - there is a leptospirosis outbreak going on right now - it's been going on for awhile and it probably started at the Mainlands Commons Dog Park in Halifax - probably some dog got it from a raccoon or rat because that's where the virus comes from - from the urine of a raccoon or rat - and then it's spread by the urine or saliva of infected dogs.

The Metro Animal Emergency Clinic in Dartmouth says that the common thread of the dogs that they've seen is the Mainlands Common Dog Park - according to the latest report from CTV news at least 50 dogs have been seen by the Emergency Department - and a quarter of those dogs have died - so this is a very serious thing.

I wrote about this virus back in 2008 when a dog in Cowie Hill died from it - his name was Benson and he was undiagnosed when he died.

Back then we had a problem with raccoons in this neighbourhood - now we don't have so much of a problem with raccoons in this neighbourhood but the problem has migrated over to rats - which also carry the disease - last week one of my dogs caught three rats in my backyard which is worrisome - there's a lot of construction going on down the street from me which I'm sure has dislodged the rats from them living happily in the woods and has moved them into the backyards on the street in my neighbourhood.

There is a vaccination for leptospirosis - but the veterinarians say that the cooler weather will kill the virus - so we just have to wait another month or so and the illness will calm down on it's own.

I'm sure it's going to reappear next spring though - so you may want to vaccinate now and be safe for when the virus pops up again in the spring - be safe and forewarned - since this is a disease that can kill a healthy dog - there's no use in fooling around - if you take your dog out in public - this should be a vaccine that you get just like parvo and distemper and bordatella - why risk a preventable death that is a horrible suffering death as well?

Here is the CTV News piece - and below is the Chronicle Herald piece:
N.S. clinic sees spike in dogs suffering from rare, sometimes fatal infection

Some veterinarians in Nova Scotia are warning dog owners to be on the lookout if their pet is acting strange -- it could be a rare infection.


The bacteria is known as “Lepto” or Leptospirosis, which infects the liver or kidneys and can be fatal for animals if it progresses. Symptoms of Lepto include vomiting, increased drinking, diarrhea and jaundice.


One clinic in Dartmouth told CTV Atlantic it usually sees about 10 cases each summer, but has recently seen 40 to 50. Veterinarians are putting the blame on unseasonably warm weather.

“Get (your pet) checked,” Katie Doucette, whose dog Diesel has been in the hospital for five days with a bout of Lepto, told CTV Atlantic Friday.


“I can't stress it enough. I wish I didn't wait the extra day.”


Humans should be careful around their best friends if it looks like their pets might be infected. Lepto is zoonotic, meaning it can spread from animals to humans.


According to the Centers for Disease Control and Prevention, humans infected with Lepto can experience two phases of symptoms. During the first phase, humans typically experience fever, vomiting and diarrhea and during the second, more severe phase, the patient can experience kidney or liver failure. 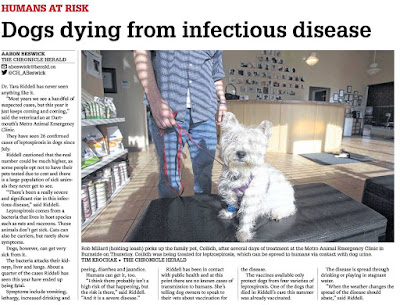