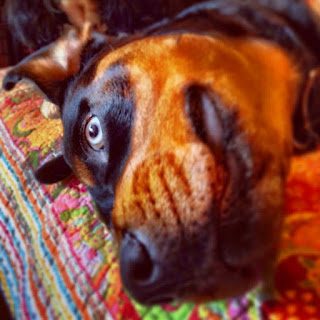 A dog named Tina - not the dog from Montreal - just a very nice, good dog - like almost all dogs with blocky heads, wide smiles and little ears

Last week the coroner released their report on the fatal mauling of Christiane Vadnais who was killed by a dog in 2016 in Montreal and it's really no surprise - the dog who killed her wasn't a boxer as the owner had listed him on their dog registration with the city - but he also wasn't a pit bull - he was simply a mixed breed dog - so the hysteria that was caused by the tragic death of Ms. Vadnais is completely unfounded and misplaced - the dogs that the government of Montreal and Quebec are targetting aren't responsible for this person's death - it's all a sham and there is still only one person in Canada since 1983 who has been killed by a pit bull type dog.

What the coroner's report did reveal though is that this dog - who's name was Lucifer - had previous bite incidents, and one of those negative interactions involved a visit to the hospital for the human and a possible fractured arm.  The second incident wasn't as severe and was a bite to the thigh of the person.

The more serious incident was supposed to be followed up by Animal Control but never was - so not only did the dog's owner fail Ms. Vadnais - the city of Montreal also failed her and in some ways are also complicit in her death.

The report also details the very sad life that the dog led - the fact that he was muzzled all of the time because his owner didn't trust that he wouldn't attack whoever he came in contact with, and when he was found by the police who ultimately killed him - he had a muzzle dangling around his neck that was lying loose.  There was also a cage in his backyard where he lived a lot of his life alone and spent many many hours while his owner - a single man was away - so he was unsocialized and lonely - as well there was dog feces and chewed up water bottles everywhere - so when the dog was outside the cage he wasn't properly taken care of.

The report also noted that the fence between Ms. Vadnais and her neighbour was not secure - there were holes in it - the neighbour had said he would get it fixed and Ms. Vadnais had agreed that she'd pay half to have it fixed but no one had gotten around to doing anything about it.

The report details the life of a dog who wasn't taken care of, who had a lot of anxiety, who had previous aggressive negative interactions with humans, and who had access to his neighbour who would not be able to fight back against a dog that was above a certain weight.  It was a disaster waiting to happen.

There were several things that could have prevented it - a fence that was secure - if the dog would have been kept inside the home and not in a cage outside that he could escape from, if the city would have acted on the previous aggressive encounters and seized from the owner - but none of those things happened - and so on June 8, 2016 Ms Vadnais was killed by a dog in Montreal.  It was all so unavoidable.  So tragic.

Canada witnessed the enactment of breed specific legislation in Ontario in 2005 and now we are watching it happen again in Quebec - 61% of the population of Canada lives in those 2 provinces according to a 2011 census so more than half of the country will live under BSL if all of Quebec goes under BSL - for a death that was caused by a mixed breed dog.

At almost the same time - on June 4th, 2016 - so 2 days before Ms Vadnais died - a 4 year old child was killed in Chesterfield Inlet NU. when she approached a neighbour’s chained dog.  No one even noticed.  Where was the outrage over that?  And since then - May 13 2017, in Little Grand Rapids First Nation MB a woman aged 30 - an Unknown Mix (northern dogs) - she was Found dead at a water treatment plant surrounded by 30 dogs.  What newscast was that on?

None.  Because it wasn't reported as a pit bull type dog.  No one cares unless it's a type of dog like that. Which is awful because it doesn't give this 30 year old woman or that 4 year old child any justice - it doesn't give people who are injured by dogs other than pit bull type dogs any kind of justice - and it also unfairly targets bully type dogs who are lovely dogs and perfect pets and tears them away from their families.

Breed neutral laws gives these people justice and keeps good dogs in their homes.  It's the only way to go and I hope some day the people in power will realize this - we have to keep fighting for our good dogs - and we have to not stop until this happens.

You can read the coroners report in english on the Justice for Bullies blog - thank you to them for providing the translation
Posted by Joan Sinden at Tuesday, October 10, 2017