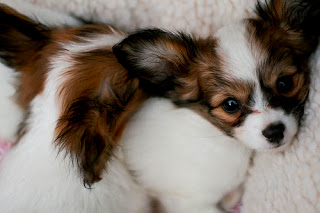 You didn't know it - but Gail Benoit was in court last week. You wouldn't know because no media was there to cover it.

It was because she had broken her prohibition order (5 years) regarding not being able to own any animals when she was convicted earlier this year when she sold kittens without a health certificate.

A couple months ago SPCA Special Constables visited her home and found she wasn't in compliance with her prohibition order when they saw she owned a fish - and last week she was in court to deal with breaking that prohibition order.

Both the Crown and Defence agreed on a $250 fine but the Judge dismissed that and instead fined Ms. Benoit a paltry $25 and gave her a year - $2 a month to pay it back.

What kind of deterrence are we showing her - and other people convicted of animal cruelty in this province if the Justice system is treating people who have been convicted of crimes and then we deal with them so lightly?

It brings to mind the classic case in 2009 when a woman by the name of Susan Keizer drowned a litter of kittens in the Valley and was convicted of animal cruelty - and fined $5 for doing it - the crown prosecutor in the case - William Ferguson - empathized with her plight - he had problems with stray cats on his own property so he understood where she was coming from when she drowned the kittens.

Thee have been a few cases over the years where the Justice system in Nova Scotia has given really seemingly un-just convictions when it came to animal cruelty - when the conviction didn't seem to fit the crime - when the person who did the cruelty really seemed to get off way too lightly here in Nova Scotia.

Back in 2007 there was the very sad and very famous case of Dennis Perrault who cut the genitals of a kitten - he was sentenced to 3 months of house arrest which at the time was probably the most punitive of sentences that had ever been awarded for an animal cruelty cases in Nova Scotia - but the Crown had asked for 3 or 4 months of actual jail time.  The Judge Anne Derrick didn't agree with that though because Mr Perrault had PTSD and had been taking a lot of pain medication and said he didn't remember actually doing the medical procedure that he was convicted of performing. 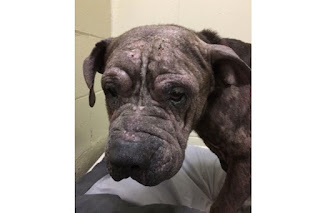 More recently - in July of this year a woman was fined $500 for failing to provide her dog with medical attention when he was ill and he had to be killed by the NS SPCA because he was beyond medical intervention by the time he was seized by them.  The woman's name was Sunday Wallace and this is a picture of her dog when he was seized - you can pretty much tell that this dog was in dire need of medical intervention.

The first person to ever get a jail sentence for animal abuse happened in 2016 - a man had been hoarding cats in Lower Sackville and was convicted of animal cruelty because of them.  Michael Cairns was sentenced to 30 days intermittently in jail (whatever that means?) for hoarding 19 cats in "quite horrific conditions" and it was his second conviction - he had been previously convicted in 2013 and at that time he had received an 18 month prohibition.  Along with the 30 days in jail he was handed a lifetime prohibiton this time - so hopefully he will not be hoarding any more animals

One really sad case - and one that the NS SPCA was unhappy with the judge with was the case of a shih-tzu that had to be killed due to the neglect of the owner - after it was seized the SPCA had it groomed and one of the poor dog's legs actually FELL OFF!  The owner said she had no idea the dog was that sick - and the judge believed her - Charlene Lucas was fined $150 and given a 5 year prohibition - she said she didn't know there was anything wrong with the leg.  The problem is that she says she's on a list to get a therapy dog though - so what's going to happen when she comes to the top of the list? 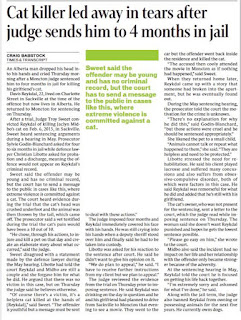 One recent case that there was a good outcome is in New Brunswick - this week a man got an actual 3 month jail term for killing a cat - 3 months!  I don't know if we'll ever get that kind of sentence from a judge here in Nova Scotia but we can always hope - the Nova Scotia SPCA certainly asks for that kind of sentence - but whether our crown attorneys and judges are willing to award that - that is another thing.

So what can you do?  Contact your MLA and demand that animal cruelty be taken seriously by our court system.

The fact that Gail Benoit and people like her continue to be able to work the court system here in Nova Scotia is really quite unbelievable.  A $25 to pay off over a year is no deterrent to someone like her - giving her a prohibition on having animals and then not actually giving her any consequence for breaking her prohibition is rather ridiculous.

Ms. Benoit said under oath in a court of law that she would never stop selling puppies - I think if anything, we should believe what she says.
Posted by Joan Sinden at Sunday, September 17, 2017