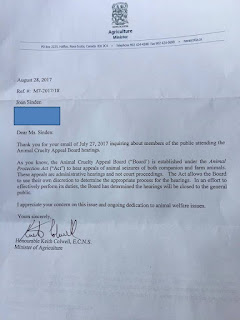 I received a letter from Minister Keith Colwell a couple weeks ago and honestly I didn't really know what to do about it.

But all his letter says is "The Act allows the Board to use their own discretion to determine the appropriate process for the hearings".

There is only one thing in the whole Animal Protection Act that talks about this:


Section 31 (4) The Board may, subject to this Act and the regulations, make rules of procedure for the conduct and management of appeals.

I wish that my job description was that broad, that's for sure.

So tonight I wrote a letter to Minister Colwell:

Thank you for your letter of August 28, 2017 in response to my query to from July 27, 2017 regarding the Animal Cruelty Appeal Board hearing that I was unable to attend that was held on that day for a man by the name of Duncan Sinclair who had 6 dogs seized from his property by the NS SPCA and was appealing to the Board to have them returned to him.

As I'm sure you know - the Animal Cruelty Appeal Board was created as an extra layer of accountability for the Nova Scotia SPCA after the horrible events of 2008 when the SPCA was found to be corrupt at the top level of management - the Animal Protection Act was changed, farm animal cruelty was moved over to the Department of Agriculture, they had to start reporting to your department every year - many things changed for the better because of things that happened that year - the premier at the time - Rodney MacDonald - actually said about animal cruelty and what had happened regarding what had happened with Celtic Pets and with the NS SPCA - "this is a situation which is unacceptable. Be it in a shelter, be it on a farm, be it in a household - they deserve to be respected, they deserve to be ensured that their safety, their health is looked after and maintained - and as a province - we'll make sure that happens."

And one of the things that came out of the changes was the Animal Cruelty Appeal Board. It wasn't his government that did it - it was the NDP government in 2011 that it finally happened - but animal advocates were finally happy when it did happen. We thought it was a win for the animals - but I have to say we are not so sure anymore.

Today they are no kill province wide, and their enforcement services are probably the best in Canada. As an animal advocate I have complete faith in them. And the Animal Protection Act says that they are the organization who enforces cruelty in our province.

I have serious questions with the Animal Cruelty Appeal Board's ability to enforce the Animal Protection Act - because that is what they appear to be doing.

What are their qualifications? The members names are publicly available and it appears as if it is populated by a breeder, lawyers and veterinarians. What special training do they have to be on the Board to be overseeing the work that specialized animal protection officers are doing - and to return the animals that SPCA enforcement officers have deemed to be in distress at the time they were seized?

I think that perhaps at the time the Animal Cruelty Appeal Board may have seemed like a good idea - but that the Nova Scotia SPCA has now moved to a place where this Board no longer needs to be in place - the animals of Nova Scotia are now safe in the hands of the enforcement officers and the Nova Scotia Prosecution Department.

I'm sure you also realize that when animals are returned to people by the Animal Cruelty Appeal Board that the Crown Attorneys who work with the NS SPCA are not willing to prosecute these people for animal cruelty charges - so this Appeal Board are de facto judge and jury - and I really do not think that any of these Board members are qualified for that.

As you said in your letter - I am completely dedicated to animal welfare issues - and this is an issue that I am going to continue to follow - whether or not I can attend these meetings or not.

I do not understand how this Board can operate with no transparency, no public access and answers to no one. That to me is not right - I do not want to go back to the days of 2008 - I worked very hard back in 2008 to get the NS SPCA changed to the organization that it is today - at great personal expense, and I believe that there is something wrong going on today with the Animal Cruelty Appeal Board.

Thank you for your ongoing dedication to the animals of Nova Scotia,