I went to the Ideal Pet Show today in Halifax and it was pretty good - there were a lot more exhibitors there than I thought there would be considering that it cost $1,000 to get a table plus you had to bring your own table and pay for wi-fi, plus plus plus and there were no deals for rescue organizations - in my experience if it cost $50 for a table at an event that has been a huge deal - so $1,000 is just out of the reach of any group that I know of - but I guess a lot of people figured that the people coming to the Ideal Home Show was worth the foot traffic of the table cost. 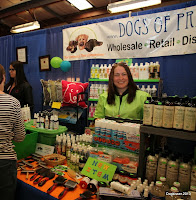 Wendy from Dogs of Pride was there - I love her and her products - she goes to all the dog shows and dog functions - she's such a hard worker! If you need something she'll get it for you - and she's also a master groomer with super high principles - so don't dare talk about shaving down your golden retriever on facebook or she will come after you! Today I bought some ear cleaner, doggie nail polish and a new freedom harness for Neena because she ate the freedom harness that I had already bought for her from Jollytails.

Homeward Bound Pound was there - which put me in two minds - so our tax dollars was paying for their table cost - I don't know what to think about that - on the one hand they were there so that they could adopt out dogs - they could also have been using our tax dollars to lobby the public to get the upcoming new contract for animal control sheltering too though, which to me is not a good use of my tax dollars - they are a private corporation that is paid for by our tax dollars, so it irks me that our tax dollars are going to pay for a table at this function. I don't know why it did, but it did. I know I will get flak for this paragraph, but I had to say it. I am such a negative nelly.

Jollytails and Tristan Flynn was also there - right at the front entrance - so I'm sure Tristan got to talk to tons to people about his positive training and huge doggy day care here in peninsular Halifax - he's also teaching a lot of seminars now, and will also teach them made to order - so if you have a group of people you want to get together - he will make you a lot smarter.

Pierre's Alley Cat Society was also at the front entrance - and Pierre made sure he got in the photo! He has been saving kitties for a long time now - and he is the best friend to feral cats - he was selling calendars, as he always is - his dream is to open a sanctuary - so you should give him some money so he can do that!

Spay Day Halifax's Linda Felix and her husband Gordon were selling Tuxedo Stan - who ran for Mayor of Halifax last year - and Earl - who's running in the provincial election currently - I own everything that I possibly can of their product even though I don't have a cat - Buttercup is my proxy cat because she's very cat like in her attitude.

Linda is changing the world in Halifax - she is amazing.

Another little group changing the world is Nova Scotia Lost Dog Network - sorry for the horrible picture but it's the only one I took - I've talked about them before - the idea of turning a stray dog into a lost dog is paradigm shifting in the rescue community - taking a dog from putting him in a shelter to putting him back home where he belongs - and these 2 ladies are doing that - and doing it in Nova Scotia - no one knows really that this is what this is happening - but THIS IS WHAT IS HAPPENING. 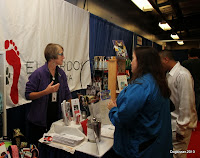 Elderdog Canada is growing the compassion in Nova Scotia to an unbelievable amount - I have met the lady who runs the organization - and their mission is so amazing you would not believe it - you must go to their website - and once you read what they are about - you will want to support them.

St John Ambulance Therapy Dogs not only has the cutest dogs around - they have the most helpful dogs - they go to places and provide therapy and help people, just like their name says - can we all just say aww. Awww. 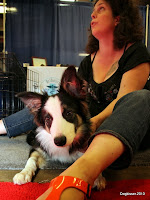 And of course this is Driftwood - the puppy born with no back legs - I think he's having his surgery very soon if he hasn't already have it so he can be fit with prosthetic back legs and walk and run just like he's meant to - isn't he just the cutest?

On to some homies - Nicolle at the Chewed Slipper - doing what she loves, right? 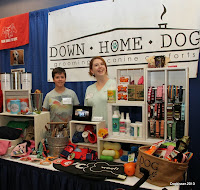 And Jennifer at Down Home Dog Grooming on Cunard Street - keeping ever vigilant and staying beautiful - and keeping our dogs beautiful at the same time!
Posted by Joan Sinden at Saturday, October 05, 2013