Don't vote for Lloyd Hines on Tuesday, and why 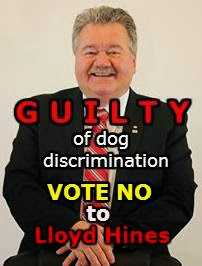 I wish I would have been smart enough to have been the one who thought up the title for this blog post - but alas - it was suggested to me. I'm not the only one who wants Mr. Hines to not be elected this week don't you know.

We thought we'd give this one last push. As of the moment I'm writing this post 676 people have signed a Change.org petition that tried to get Lloyd off the ticket for the provincial election - the people lost that push - but hopefully the people will have their say on Tuesday and not elect him to the Nova Scotia Provincial Legislature.

And here is why.

If he has as little respect for a species of animals called dog as he does for humans - we are in trouble. He wants to exterminate several breeds off the face of this earth - and he wants to not just have them removed from the very small sphere of earth that he was in charge of - the municipality of the district of Guysborough - he wanted to have them banned from the whole of Nova Scotia - which he almost did in 2008.

If he's willing to talk with such catastrophic language about our companion animals when there has never been any child "eaten", killed or mauled in the province of Nova Scotia - ever, ever, ever - how effective is he going to be as a provincial legislator?

Is he going to be like Henny Penny all the time? Spending all his time with his little feet running around going "the sky is falling, the sky is falling"? When really we're just having a little rain shower - being ineffective and meaningless. That is not the legislator I want in my legislature, that's for sure.

And I certainly don't want anyone in my legislature who wants to ban and exterminate the companions that I have chosen to spend my life with - dogs - and that's what he wants to do.

He discriminates against dogs. What else will he discrimate against.

Lloyd Hines. Don't vote for him on Tuesday.

Here is some more information -

In 1995 Lloyd Hines lobbied for and passed breed specific legislation in the district of the municipality of Guysborough – banning pit bulls, with no grandfather clause built in.

Because the media paid virtually no attention to this issue, most residents of Guysborough were unaware of the new law in 1995 . Apparently without public support or, to the contrary, outrage, the municipality amended the by-law in 2004 to ban Rottweilers (the amendment contained a grandfather section to exempt Rottweilers already living in the Municipality). The ban on Rottweilers was passed after the New Brunswick attack that led to the death of a four year old child. Warden Lloyd Hines was active in pushing for these bills, and he threatened to push a breed specific ban through the Union of Municipalities – which he almost successfully did in 2008 – but because people in other areas of Nova Scotia know what happens when breed bans become law – Lloyd Hines failed in his bid to pass breed restrictions throughout the whole province.

Lloyd Hines is currently running as a Liberal Candidate in the provincial election in the riding of Guysborough Sheet Harbour in the October 2013 Election.

When Lloyd Hines was Warden of the District of the Municipality of Guysborough he made it a priority in his mandate to first ban pit bull dogs, and then add rottweillers to that ban.

When Lloyd Hines was first Vice President, and then President of the Union of the Nova Scotia Municipalities he made it a priority of his mandate to have breed restrictions passed throughout the whole province of Nova Scotia.

If he is elected as a Member of the Legislative Assembly of Nova Scotia – what do you think one of his major priorities will be when he gets there?