How can we get into this back yard to save Bullet? 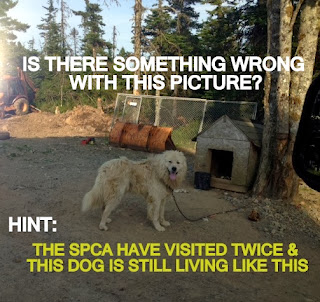 Today the advocacy group People for Dogs released a photo of a specific dog who is suffering today in Nova Scotia.

His name is Bullet, he's not a year old and he's spent that entire year tied to the dog house in this photo (Bullet and this dog house cannot be seen from the street) because his owner didn't socialize him or train him so he's not potty trained and not polite enough for the owner to let him live inside - the lady who knows about him says that the owner's father had a junkyard dog - so he's used to having a tied dog.

And none of it has worked.

Initially the dog's owner allowed the lady to come on the property to give Bullet water and food - but the owner is now refusing her that privilege and has now said he has a gun and will shoot her for trespassing.

So he is now at the mercy of his owner. Normally that would be okay - my own dogs are at my mercy - but I'm a responsible dog owner - I haven't abandoned them in my back yard and not fed them or given them water or companionship or training or any other of those things that you're supposed to do - or I should say, that are a pleasure to do, and are the reason why I have animals.

When People for Dogs released the photo - they sent it to all the provincial MLAs, the Premier, CBC and CTV and the Herald, and the NS SPCA. They also sent some text with it which I will paste below.

It'll be interesting to see if they respond at all.

The SPCA has responded - in that they are going to go and check on the dog - which is fabulous.

What is sad about that is that all they can do is if Bullet is not in urgent medical distress - they can't take him - so hopefully he's in bad enough shape to seize - so everybody say a prayer for Bullet on that point. 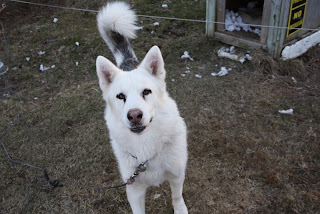 We need laws that don't allow dog owners to keep their dogs in these kinds of conditions - because they just are not humane.

There is no way for the area they are living in not to turn into mud - there are some days that the air is completely filled with flies that bite the hell out of them - it`s impossible to keep a water dish full - it's impossible for them not to be hungry - and it is cruel and unusual punishment to impose solitary confinement for a lifetime.

The continual tethering of dogs has been allowed culturally in the past, is allowed because people are lazy - and is done for a lot of stupid reasons - but the time has come in our CURRENT culture where it is completely unnecessary and if there are enough strong minded dog lovers out there, we can end it in our lifetime, just like smallpox.

The time is now - this dog Bullet is out there suffering as I type - he has a face, legs - no grass and no bed - and he is SUFFERING NOW - and we need to save him.

I was contacted I believe in February by the owners daughter who asked me to help.The dog had been bought as a puppy last Summer.They called him Bullet The owners father had a junk yard and so he was used to
having a junkyard dog around.The dog was tied outside.

When she contacted me she said she had reported to the SPCA on two occasions that Bullet was being neglected. It was very cold, the dog was not being fed each day and often was not given water. He had no bedding
in his" doghouse" if that's what you call it) and she felt he may freeze to death or die of neglect.

I spoke to the owner who proudly said the SPCA had been out and said the dog was fine.His daughter was fighting with him everyday to bring Bullet into the house on really cold nights...The owner refused as he
said the dog which is less than a year old has not been house trained or socialised. He often lunges at anyone walking by. He told me he is an angry dog. This could be a safety issue if he ever got off chain. Chained dogs often can turn aggressive and are 2.8 more likely to bite.

Winter turns into Summer and now the dog ( that has a double fur coat) is left to bake in the heat. Offers to the owner to have the dog groomed at my expense are laughed at ( He says getting a dog groomed is for Hollywood bitches) So his fur is smothering him.

On my last visit to him it was 27 degrees ( that was the day I took the pictures.) No one was home... He had no water... there was an pot beside the doghouse that was used for dog food... which was empty.I gave him a
large mixing bowl full of water which I had brought with me. He drank it all at once) He had flies on him and he was panting continuously.

As you can see by the photos his fur is matted and twisted ( another source of pain) he has fleas and has no way of moving around as his rope is no more than 6 ft long. He is underweight and barks in distress continuously.

I was so concerned about the dogs welfare, I offered to buy him . I offered the owner double the price of what he paid for the dog, simply to have him taken away from his misery The owner refused saying" He's just a dog".

This dog is not walked. He has no toys or any stimulus. He has no companionship or comfort. he gets food and water only when the owner thinks about it, as his daughters says he often runs out of food for days at a time

Things have got to change for Bullet... He deserves better than a life permanently on a chain.

As we have tried under the Act to help Bullet and have not been able to do so under the law, we are asking ALL of our elected officials to help. Is there is a hero in the group? Are you able to do more under the Act than we are? We are told again and again by the Minister that everything is fine with the Animal Protection Act. PLEASE! Test your Act with Bullet. Help him. We can’t. We have come to the end of our rope.