The world really is going to hell in a hand basket.

Beijing China has officially banned large dogs as of June 13, 2013 - and they are actively rounding them up so that they can kill them off.  I haven't seen anything written as to why they are doing it.

In the last couple of years China has been rounding up and killing dogs because of rabies fears - but I haven't seen that excuse used in this latest kill-off.

This time they are even giving people rewards for turning their neighbours in if they have a large dog.  China really does seem like a really fucked up place.  I'm posting an article at the bottom that explains more.

And also this week - in Ohio - a "humane" officer shot a litter of feral kittens - saying that was the best thing for them - and telling the family who's backyard they were living in that "they were going to heaven".

He's been cleared of any wrongdoing by his manager.  He was only feet away from the home where several children and their mother were watching what he was doing when he discharged his firearm to kill all the kittens at point-blank range.

We really can't say too much, really because here in Nova Scotia up until at least a couple years ago that same manner of "euthanasia" was still allowed by at least a couple of animal control departments - death by shooting - if the animal control officer thought he had a clear shot.  It may still be allowed as far as I know.  So we here in shangri-la really aren't that much more evolved than that fellow in Ohio.

It really makes you feel sour, doesn't it?

Here's the article about the story in Ohio -

An Ohio policeman shot to death a litter of kittens on Wednesday, telling a group of screaming children that the animals would be going to “kitty heaven”. But instead of firing the officer, the local police department cleared him of any wrongdoing.

Humane Officer Barry Accorti was responding to a report of a litter of feral cats that were located in the woodpile of a home in North Ridgeville on June 10. The resident who made the call said the cats were bringing fleas to the home and leaving dead wildlife in her backyard. Twenty minutes after the call was made, the officer arrived at the scene. After spotting the five kittens, he told the resident’s distressed children that the cats would be going to heaven. Shortly thereafter, he took a gun from his vehicle and shot the animals to death.

“He informed [the resident] that shelters were full and that these cats would be going to kitty heaven,” Ohio SPCA Director Teresa Landon told the Cleveland Sun News. “She assumed he would be trapping them or something and taking them to a shelter and they would be humanely euthanized if they were not adopted.”

Initially, the woman who made the call assumed that the gun was a tranquilizer. But to her surprise, the 8-to-10 week-old kittens were shot dead, just 15 feet from the back door to her house.

The homeowner’s four children are all between the ages of 5 months and 7 years.

Landon told the Sun News that the incident is heartbreaking and inexcusable, and that a humane officer should never resort to using a weapon unless the animal is in severe pain or attacking the officer.

Landon said that Accorti should be fired and charged with animal cruelty. But instead, Police Chief Mike Freeman cleared the officer of any wrongdoings and concluded that his actions were appropriate.

“After visiting the scene, talking with the responding officer and re-interviewing the complainant, I have decided his actions were appropriate and have decided not to impose any disciplinary measures for the incident,” Freeman wrote in a press release, describing the cats as having been “euthanized”. He also stated that research and animal organizations perceive shooting as a humane form of euthanasia. But Landon still believes the officer should be prosecuted

“The kittens were just sitting there,” she told The Morning Journal. “They didn’t have to die. They were only 10 months old at most and they still could have been socialized.”

And here is the horrific story about Beijing 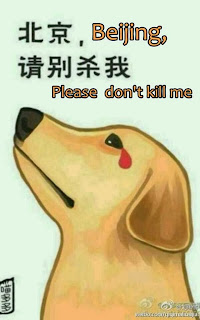 IS THIS THE END OF ALL OF THE LARGE SIZED DOG RESIDENTS IN BEIJING?

A government order has been given out to capture all large-sized and aggressive dogs throughout Beijing. The order was put into effect on June 13th.

On June 2nd, Beijing Municipal Police Department released a public announcement about activating an order to capture any large or aggressive dogs found in the city beginning on June 13th. In the name of public order and safety, the order states that the police will “retain” all large dogs in the municipal area of Beijing, as well as some of the suburban areas. The order gave 10 days for dog owners to relocate the dogs to outside of the city. Any large dogs found in Beijing after June 13th will be “retained”. Owners of these dogs will then be fined almost 1,600USD (10,000RMB) if they are a business, and individuals will be fined almost 800USD (5,000RMB). The order is targeting not only all of the stray dogs and unregistered pet dogs but also legally registered dogs. Dogs are now being captured almost around the clock. These “captures” are not only taking place on the street. Police are also traveling to “suspects” residences to confiscate their dogs. According to the announcement, all resistance to the enforcement of this order will be severely punished.

In the public announcement, the Beijing Police department encourages the general population to report anyone they know that owns a large-sized dog. People who turn in such dog owners will be rewarded with cash, and their identity will be protected. Anonymous hotlines to the police station of all communities in the city of Beijing are listed on the announcement. Now, dog owners not only have to watch for the police, but they must also fear their neighbors, co-workers, or anyone else who might have knowledge of their dog. According to reliable inside information, the police officers have also been given incentives to capture at least 10 dogs per officer. Each officer who meets this quota will receive a cash reward.

Large dogs are classified as those that are over 35 cm in height (13.7 inches). All dogs that exceed this size restriction are subject to the order. The top three most popular dogs according to AKC registration – Labrador, German Shepherd and Golden Retriever are all targeted and in danger of being taken. According to the public statement, the order has equated a dog over 35 cm in height as a dangerously aggressive dog that presents a serious danger to public health and safety.

In reality, all dogs on the walking on the street, with or without their owners, are targeted for a possible capture. The following are the list of dogs that are subjects to be captured and retained:

Any dogs (either strays or pets) that are captured will not be returned to their owners and no adoption or retrieval of any sort will be allowed. Theoretically, the small sized dogs are allowed to be reclaimed by their owner if the owners register their dogs or show the proof of an existing registration. In reality, however, the chances for these small sized dogs to be returned to their families are low. The police department is also not allowing owners to register new large sized dogs or renew existing registrations. As any dogs that are seen and captured by the Beijing police will not be returned to their families, you may be wondering what will happen to them. The answer is, no one knows. No government office has released any information or responded to any questions in regards to what they will do to these dogs.

The severity and cruelty of this order has caught most Beijing residents completely off guard, and no one yet knows what motives could have precipitate it. The order and the actions taken in its name, however, have obviously outraged the many dog owners and dog lovers in China. News of it has gone viral on Weibo and created a massive online protest against the Beijing Police Department and this vile dog capture order.