How to stop a window barker - the easy way 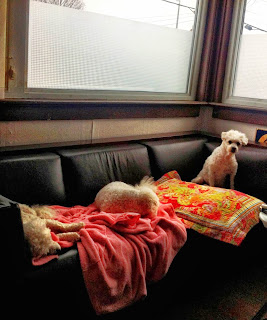 I got a fabulous new leather couch, and the only place it looked good was in front of my big picture windows - which is a spot I've always avoided putting furniture that Bubby could climb up on - because when he can get up there he will stay up there and bark 24 hours a day at whatever is going by, and for anyone who has a dog - you know that is the most annoying thing in the world!

But looks trumped Bubby's barking and I moved the couch over there - and I had to think of some way that I could keep Bubby from doing what he loves to do - so what was I going to do that would keep both of us from going completely insane?

I couldn't knock him down everytime he started barking, I couldn't put a shock collar on him, I couldn't keep him from climbing up on the couch, I couldn't ignore his barking, the blinds I have are in no way a visual barrier for him - so what I decided to do was something that has worked to stop his barking 100% - so I thought I'd write about it here - because it is also completely non-violent and non-punitive.

I put up visual barrier mac-tac on the windows - so he cannot see what's happening outside the windows, but the light still comes in - but he can't see what's going on outside - and it has completely kept him from barking - even though the couch is right next to the windows.

It's awesome. I haven't had to do anything to stop him from barking - if only Cesar had thought of that in the episodes where he had window barkers - it's a lot less punitive than putting skat mats on the couch, that's for sure. And he can still enjoy the couch all he wants.

I can still see outside because I'm tall enough to see over the mac-tac - and my view outside isn't all that spectacular - directly across the street from me is only a business, so it's not very pretty anyway - so I'm not missing much.

So if you've got a horrible window barker - put up some mac-tac, and I'd bet you'll solve your problem pretty quickly, and very non-violently - they don't bark at what they can't see.