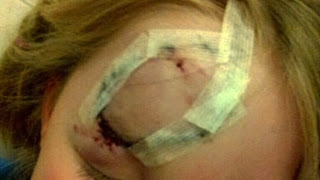 A pit bull type dog bit a child on Sunday in Dartmouth - and CTV news is now questioning (again) whether or not we should ban pit bulls.

They've got a poll going on asking whether or not pit bulls should be banned - so if you're reading this on December 11th, 2012 - you can go put your voice in there if you want.

The story is that the 4 year old child was with another person at a house - so she didn't know the people at the house she was at where the dog was at - and she bent down to pet the dog - and it bit her on the forehead, and it was a pretty bad bite.

No one can minimize the impact of the bite - the little girl's injuries, and the parents anger should not be brushed away.

The child's owner wants the dog destroyed and restrictions placed on the breed.

As well, city councillor Gloria McCluskey has entered the frey and said "she agrees that mandatory training is needed for pit bull owners. It’s a serious situation and it’s time we looked into this. Some of them are probably lovely dogs, but there’s a history of pit bulls attacking humans and other dogs.”

Last year when there was another incident - we get about one incident per year in the HRM like this - so you can tell that there is really an epidemic of pit bull maulings going on in this end of the country - Gloria McCluskey also got involved - (I guess she fancies herself a dog legislation expert) and at that time she asked City Staff to look into making bylaw A300 tougher in regards to pit bulls - she wanted to "introduce a notice of motion at city hall calling for stiffer fines against the owners of dogs that attack people or pets, and wants consideration for a possible ban on aggressive breeds. "There have been bans in other jurisdictions of breeds known to be aggressive", she said. "people who train their dogs to attack or who have experienced aggressive behaviour from the dog should not be out walking that dog in public without proper controls."

That was in September 2011 - and the report still hasn't come back - it's supposed to come back sometime in the next few months - things happen very slowly at the HRM City Hall I guess when it comes to dogs!

I am not at all interested in re-victimizing the little girl or her parents - when a dog bites a child it is a very serious thing and it should never happen - and when it does happen there should be serious consequences.

But each time it happens people like me have to speak up and say that the dog who bites the child had NOTHING TO DO WITH THE DOGS BREED.

It had to do with the circumstances - who was supervising the dog and the child, what was the dogs background, what was the age of the child - was there an adult present - and if not - WHY NOT?

Why did that child's parent let that child go to that house without an adult present? Why was the adult in the house taking a nap?

These questions have to be answered - because every dog in the province of Nova Scotia could potentially be affected by this incident.

We as dog owners and dog advocates can not let hysteria take over - and let the media, and politicians rule our world like they did in Ontario.

We cannot let that happen.

It is times like this right now - that we need to be very careful - and speak up - in conversations with our friends, our MP's, our city councillors - our dog friends - speak up - and do not let this incident turn into breed specific legislation of any type.

Bylaw A300 as it's written right now is sufficient to deal with the dog bite incident that happened with the poor child on Sunday - I hope that the child's parents take the time to read the bylaw - and talk with animal services and understand that what is place right now is sufficient - in the HRM we have dangerous dog legislation - that deals with dangerous DOGS - not dangerous BREEDS - because that's what we have - DOGS.

And local media - stop sensationalizing - you are doing no service to your readership - we are watching you right now - and we are close to stopping watching you. Take heed - especially you CTV News.....shame on you.
Posted by Joan Sinden at Tuesday, December 11, 2012