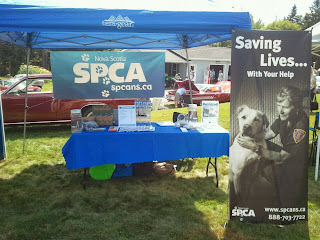 September 15th - this Saturday, is the 3rd annual "Bark in the Park" - one of the major fundraisers for the NS SPCA - and this year it's being held over in Shubie Park in Dartmouth. Last year it was held in Seaview Park in Halifax, so it's nice that it's moving around.

It sounds like there's going to be lots of fun stuff going on - I'm not sure which dog I'm going to take with me, on Friday both Bubby and Sidney are going to the beauty parlour, so maybe it'll be one of them - but Ollie is still loooking for a home - so maybe it'll be him!

If you're in the Shelburne area - you'll definitely want to be hanging out with your dog on Sunday (September 16th) because they're going to the dogs! It's happening at the Shelburne Museum and there's going to be a whole day's worth of fun - there's going to be a dock-dogs event, flying disc dogs, face painting for the kids, and lots of other fun stuff - you can find out more about the whole day at http://shelburnemuseum.org/visit/shelburne-museum-goes-to-the-dogs/ 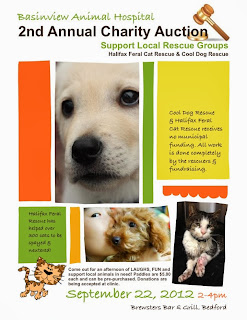 NEXT weekend Basinview Animal Hospital is holding an auction for TWO local rescues - Cool Dog Rescue, and Halifax Feral Cat Rescue which is run by Lori Martin. I think it is awesome when vet clinics and veterinarians raise money for rescues - it shows that they put their time and initiative where their mouths are and that they care about the local community - and they should be supported by everyone in the local advocate and animal community - awesome.

The auction is happening September 22nd from 2-4pm at Brewsters Pub and Grill in Bedford - they've gathered up a bunch of great stuff to bid on - so go out and spend some money! Check out their facebook page for more information. 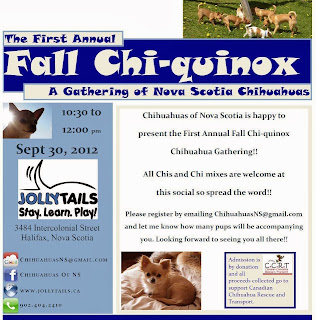 September 30th - is an event I'll definitely be taking Ollie to! It's a gathering of Nova Scotia Chihuauhas! It's happening from 10:30am to 12:00pm at Jollytails Daycare at 3484 Intercolonial Street in Halifax - and hopefully Ollie will meet his new Mom or Dad there - here's hoping, anyway!!
Posted by Joan Sinden at Wednesday, September 12, 2012