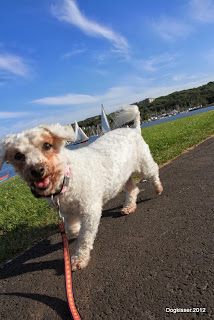 This is Sassy! She is the newest member of the Dogkisser family - I got her today! 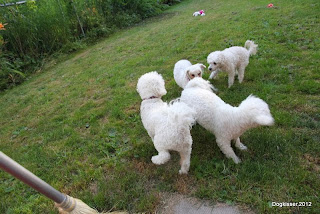 I got her from the fabulous local rescue "Atlantic Small Dog Rescue" - this is my 3rd dog from them. She is (at least) 10 years old and she's a bichon frise like Bubby and Sidney - so I am staying on my groove of small white dogs - I've begun to say that I am "building my small white dog army"! haha! 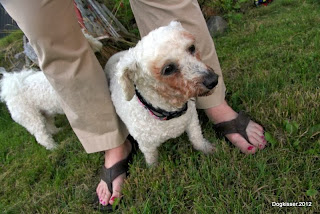 She has come from a pretty sad back ground, but we`re now going to let that get her down - she was rescued in New Glasgow by an amazing lady named Amy who is a groomer there - the people who owned her said they didn`t want her anymore because she smelled and they couldn`t afford to have her groomed. When Amy groomed her her coat was so matted and gross it came off in one piece. She was full of matts and fleas and ticks - poor Sassy must have been so uncomfortable - she has also had to have all her teeth removed except for her 4 canines - so thank you very much to ASDR for doing that for her! Her foster family have reported that she seems to be fairly deaf which will probably work out pretty good in my house - because Bubby and Sidney love to bark - so at least someone in the house won`t be bothered by it! 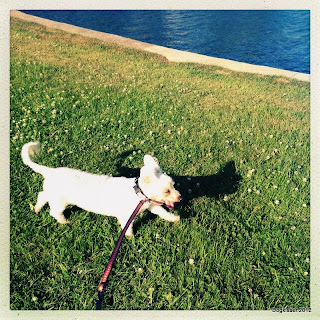 So far I haven`t gotten any photos where she seems really, the least bit happy - when I took her from her foster home she was shaking like a leaf - I think she was really beginning to enjoy herself there - so she must be feeling really horrible here at my house tonight.

I wrote a post a long time ago called "You can tell by the light in their eyes" about the change that comes over a dog once they have settled into a home where they are safe and forever - so I know I will cherish these photos I took tonight when I compare them to photos that I take six months from now - and the light in Sassy's eyes has transformed and she's blossomed into the dog she was meant to be.

I can hardly wait.

Email ThisBlogThis!Share to TwitterShare to FacebookShare to Pinterest
Labels: rescue