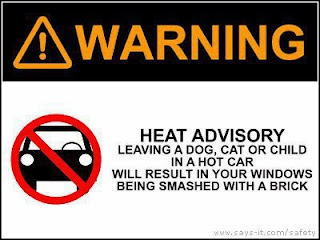 There have been a couple very tragic and unsettling stories in the news in the last week or so about dog owners leaving their dogs in their cars when they go shopping - and the dogs dying from heat exhaustion because they've been left unattended for too long.

You'd think everyone would know by now that you just cannot leave any living thing - a baby, an adult, a dog - even a plant - in an unventilated, un air-conditioned car for even 2 minutes on a hot summer day. That sentient being is going to suffer and even die if you do that.

I know that in my 2005 Pontiac Wave that doesn't have air conditioning - on some of the hottest days of the summer - with the windows rolled down as far as I'll allow them so that the dogs can't jump out and the blowers going as fast as they can and the car moving - it was almost too hot for my geriatric dogs last summer - so I would take my Dad's car that had all the bells and whistles - and air conditioning - so that we could ride in style.

But because there has been these horrific stories in the news - there has also been a back-lash. Some people have been suggesting that a dog's place is AT HOME.

And I disagree with that.

It has been my mission for the last 10 years to tell the world that a dog's place is with their owner - if he or she is well socialized, well trained and can handle it.

No dog in his right mind would want to stay at home if he didn't have to - and most of the dog owners that I know would prefer to take their dog with them.

That doesn't mean that any time is spent in the car alone. It means that they shop at stores where they can take their dog with them, they spend their free time doing activities that include their dogs, and the time that they spend with their human friends also includes their dogs and their friends' dogs.

In the year 2012 - the spectre of breed specific legislation is weighing heavily everywhere - including here in Nova Scotia - there are a lot of people in this world who don't like dogs and don't want to see them out in public - and will seize upon any excuse to keep them out of public spaces.

Please continue to take your dogs' out and keep them in the public eye - the world needs to see well socialized and well trained dogs of all types and breeds - it's the only way that we will change the dog-haters minds - by living our lives by example.

And if you see a dog or baby dying in a car - don't hesitate to smash the window to save their life.
Posted by Joan Sinden at Wednesday, June 13, 2012