Public talk hosted by Director/F​ounder of the Farm Sanctuary

The Founder and Director of the Farm Sanctuary, Gene Baur,is giving a a public talk as part of his North American tour on March 20 at 6 pm in the Ondaatje Hall, Marion McCain Arts & Social Sciences Building.

The title of the talk is “Farm Sanctuary: Changing Hearts and
Minds About Animals and Food”

I'm probably like a lot of people and having been receiving emails from the Farm Sanctuary just about as long as I've had an email address - which is a long time - they are an organization that has been around a very long time, which is very admirable - and the fact that they haven't been drawn into any of the controversies that drag down other humane organizations into the mud is really quite amazing.

There was an article in the Chronicle Herald which I'll post below - but when I was poking through the Farm Sanctuary's website, I discovered a term - that I've never heard of before, which blew me away - it's called "CARNISM". 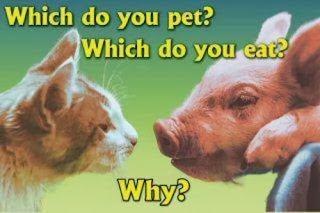 It's the opposite of "Veganism" - carnism "denotes the ideology of meat consumption. Ideologies are social belief systems that have enormous power to shape people’s attitudes and behaviors. Ideologies are often so embedded in society that their influence is mostly unconscious-and therefore unquestioned. Typically, ideologies are only recognized when they are an exception to the “normal” way of thinking (what we call the “dominant ideology”). This is why there is a name, vegetarianism, for the ideology that considers the consumption of other animals inappropriate or unethical. The dominant ideology in our society maintains that eating other animals is normal and even necessary. However, there is no name for this ideology. We therefore tend to view eating animals not as a choice, but as a given. This way of thinking makes society view the consumption of animals as normal, natural, and legitimate.

If we consider carnism to be an ideology, then we can explain why it is possible to love some animals and eat others. We have been so socialized to believe in the legitimacy and necessity of carnism that most people do not even think of their meat as having once been an animal. Indeed, most people begin eating meat before they can even talk, and the process of maintaining the invisibility of the animals who become food continues for the rest of our lives.

carnism teaches us to justify eating animals, and it does this by presenting the myths of meat (and other animal products) as though they were the facts of meat, by promoting the Three Ns of Justification: eating animals is normal, natural, and necessary. The Three Ns are institutionalized - they are embraced and maintained by all major social institutions, from the family to the state - and, perhaps not surprisingly, they have been invoked throughout history to justify other violent, exploitative ideologies (e.g., slavery, male dominance, etc.).

Carnism also defends itself by distorting our perceptions of meat and the animals we eat so that we can feel comfortable enough to consume them. We learn, for instance, to view farmed animals as objects (e.g., we refer to a chicken as something, rather than someone) and as abstractions, lacking in any individuality or personality (e.g., a pig is a pig and all pigs are the same), and to create rigid categories in our minds so that we can harbor very different feelings and behaviors toward different species (e.g., beef is delicious and dog meat is disgusting; cows are for eating and dogs are our friends).

There are a number of other defenses that overlap with and support those mentioned here, but all defenses serve a single purpose: to block our awareness and empathy when it comes to farmed animals and the products procured by their bodies. With awareness of carnistic defenses, though, we are less vulnerable to their influence; we are able to step outside the system and look at the issue of eating animals through our own eyes, rather than through the lens of carnism.

You have to question yourself - why will you eat cow and not veal? What REALLY is the difference? Why is eating dog so disgusting to our culture but not to the Chinese? What about snails and squid? And horse?

At the end of the day -the animal does have to die in order for us to eat it. End of story.

It's a subject that fascinates me - I know that even if I personally give up meat - I will still feed it to my dogs - they don't know what carnism or vegetarianism is, but it's something that I spend a lot of time thinking about - and this novel idea has got me thinking.

Farm animal rescuers oppose factory practices
As a good-looking kid growing up in Hollywood, Gene Baur would hit casting calls around town, landing background work in movies and television series as well as spots in commercials for fast-food giants McDonald’s and KFC.

While not a shocking admission on the resume of many Californians, it does stand out when reviewing the bio of the co-founder and president of Farm Sanctuary, the largest farm animal rescue organization in North America and avid opponent of factory farming practices.

"I was definitely a city boy," Baur says, chuckling, when thinking of his unconventional route to becoming an animal rights crusader for farm animals.

Baur, who will be in Halifax for the first time on Tuesday to talk about his organization, said his life’s work sprang from a need to do good, along with a growing interest in changing his own way of life.

He said his first taste of volunteering came in college with a group that helped kids with terminal illnesses.

By the mid-’80s, he had become a vegan and had gained an interest in animal welfare issues related to farming. He began working with others to rescue farm animals in distress. He even sold vegetarian hotdogs out of an aqua blue Volkswagen van at Grateful Dead concerts to help fund the rescue efforts.

"It all came together," he said recently from his home in Washington, D.C., where he now spends much of his time lobbying for healthy school lunches, humane euthanasia of cattle and tougher laws involving the treatment of factory farm animals.

"My initial primary focus was to take care of them and to tell their stories," he said of his early rescue work, which would lead to undercover operations exposing the conditions in slaughterhouses or battery-cage warehouses.

Farm Sanctuary was formally launched in 1986. Since then, the advocacy group has established a 70-hectare sanctuary in Watkins Glen, N.Y., and two shelters in California, as well as an extensive adoption network for animals that often fall through the rescue cracks.

The group also opposes raising animals for food and speaks about the environmental impact of producing and consuming meat, milk and eggs.

Baur said one of the biggest changes since he started Farm Sanctuary is the increased concern about the environment and with it a growing back-to-the-land movement.

He said a "convergence of issues" has propelled educational programs related to promoting animal welfare and a plant-based diet.

The author of several books, Baur has also been featured in documentaries on farming practices and animal welfare.

Email ThisBlogThis!Share to TwitterShare to FacebookShare to Pinterest
Labels: Meat and dog eating, stuff to do coming up