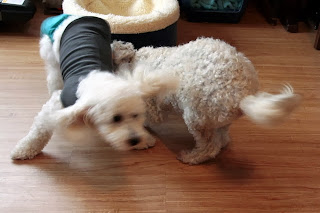 I am learning more and more about Bubby's personality and quirks - what he can handle - what he can't, things that he's afraid of and how he reacts to them - it's all very interesting. 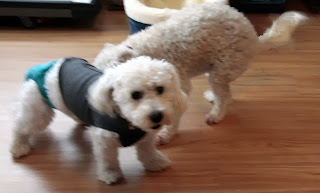 I've had him for 2 months now, and I've pretty much settled on what I think his background "story" is - at least one that pleases me and answers the questions that I have - I don't know if his rescuer would agree with me - but it's what I've cobbled together from what she said, and what I've figured out from Kijiji postings that his puppymill operator has made in the last little while - 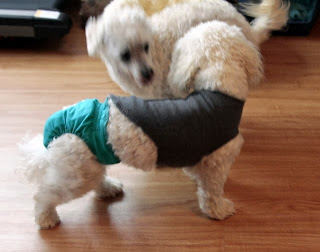 It seems like Bubby spent the first 6 months of his life at his "breeder" - which I am henceforth going to call a puppymill - because it is very obvious that he has had no human socialization whatsoever - and that's where almost all his problems and quirks are stemming from. He is deathly afraid of humans and gets overstimulated really quickly - and when he passes his threshold - he lunges out will bite, and it's a pretty hard bite. 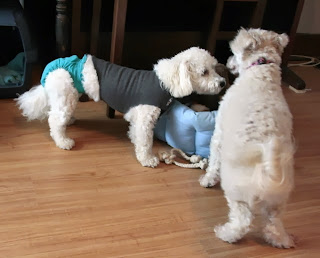 So he spent his first six months at the puppymill - completely missing every kind of human socialization that he needed to be a normal dog - but luckily he was around other dogs - so his dog/dog skills are awesome. 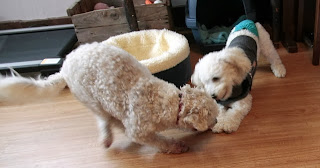 At 6 months - he was purchased - probably for a cut price - because when I contacted the puppymill he came from a couple weeks ago when he was advertising on kijiji for puppies - the puppies were $800 - but he had some dogs left over still from a breeding last November - and he was selling them for $400. I can only imagine how damaged those dogs are now.

So at 6 months - Bubby was adopted by a family - and they thought they were getting a normal dog - but I guess he only bonded with the wife - and there were also children involved - and any children that Bubby has come into contact since I've had him - he almost immediately attacks - so he probably did the same thing to this family. 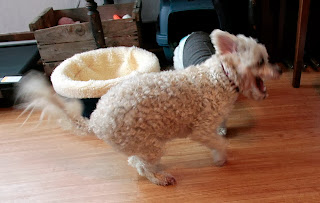 Atlantic Small Dog Rescue said the husband told the puppymill "I was told you were selling me a family dog - this isn't a family dog" - and the puppymill offered to take Bubby back and give them another dog - but for some reason they didn't do that - and they instead dumped him at a campground in Truro - and that's how Altantic Small Dog Rescue got involved - and then I adopted him.

So where do the thundershirts and doggy diapers come in?

They are what I bought today - although the doggy diapers are too small - his penis sticks out the top - so they are no usew hatsoever.

But 2 months after I got him - he's still peeing and pooping wherever he feels like. It could be indoors, it could be outdoors - if he wants to go - he'll go. He could be laying next to me on the bed - and he'll stand up - and just start peeing - right next to me. He'll walk right through his poop - it's all typical behaviour for former puppy mill dogs - and I am struggling with it currently.

If you keep track of myy photos - the background of my house has changed in the last couple of months - I have thrown out my couch, all my carpets, I've bought a new bed, every room has a baby gate on it, every dog bed that I had for Charlie and Daisy has been thrown in the garbage - all because Bubby has peed on everything. 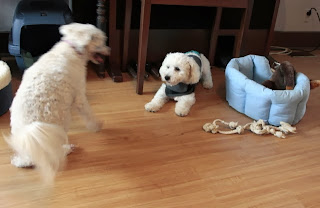 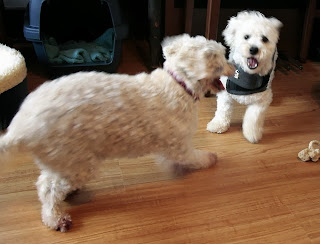 We are going to dinner at my sister's house and there are going to be 5 humans there - and I have a very dog-intolerant family - so if he tries to bite anyone - there will be shrieking and freaking out and very bad energy in the room - it won't be pleasant.

I hope that it operates as advertised. We've got about 18-20 years ahead of us and the world needs to have a people friendly Bubby - he is too beautiful to keep in private. I hope he and I can figure things out.