The numbers are in for Year One - Homeward Bound City Pound

I applied for a "Freedom of information request" to get statistics about our taxpayer supplied animal control supplied shelter services - Homeward Bound Pound - which is pretty ridiculous considering that they are paid by us - we should be able to get those statistics freely - if you go to the Calgary Animal Control website - they have the same statistics posted going back to 1984 - maybe it's because they are proud of their statistics - I'm just surmising that, though... (I'll be comparing our statistics to Calgary's statistics later)

566 dogs were taken in by Homeward Bound.
352 of those dogs were reunited with their owners (62%)
113 dogs were adopted to new owners (20%)
50 dogs were transferred to other rescues for adoption (9%)
51 dogs were euthanized because they were deemed dangerous to the public for aggression issues, serious illness or injury.

Those numbers were based on me asking the following questions -

I also asked the following question:

"How does the HRM monitor Homeward Bound (a corporate entity) to make sure animamls are being treated in a humane and compassionate way - ie humanely euthanized, well cared for - in light of atrocities at other corporate pound facilities in Canada - like Berger Blanc in Montreal, Quebec".

I'll tell you what the HRM's answer was to this question was at the end of the post - I was gobsmacked by what their answer was.

I'm sure that 850 also included injured cats - but there's no way that they would have taken in almost 300 injured cats in a year.

So they only took in 67% of the projected number of animals that their contract figured they'd be taking in. That's a pretty good deal for the owners of Homeward Bound, I'd say.

If you look at it horribly oversimplified - Homeward Bound's 2.3 million contract over 3 year's gives then $434,457 in the first year - that's $511 per dog if you figure that they were supposed to be looking after 850 dogs.

But if they only took in 566 dogs - they actually got $767 per dog - that's quite a jump in how much they got to look after those dogs. Quite a profit marginl Plus they got money from each of the dogs they adopted out.

And don't forget about the fact that they put out a call at one point asking for free stuff from people - blankets, towels - it's expensive to make money in this city you know.

Another thing - if you read the article below - there seems to have been some double dipping going on that I never noticed before - read the article "Halifax has a shiny new animal pound" - and you'll see near the bottom of the first column - "Allison Dube, the shelter's animal care supervisor"

And I know I'm going to get shit for this because I'm touching the gilded in gold "Hope for Wildlife sancturary" again - but if you watch their tv show you'll know - she is Hope's right hand woman at the Wildlife place - she runs the Wildlife sanctuary - how does she have time to also be the Pound's Animal Care Supervisor?

I am just wondering if this is one of the way's that Homeward Bound was able to beef up their tender by putting in dummy names to give them cache and experience at the Pound. I'm just surmising here.

I am saying all of this as a tax paying Haligonian. I want to know where my tax dollars are going - because they certainly aren't going to them maintaining their website, or educating the public, providing us with meaningful statistics or getting the dogs out so that the public can see them.

Which brings me to my next section - and that's the euthanasia statistics and giving dogs to other rescues - and I'm lumping this section together, which you'll understand shortly - because they're pretty much the same thing.

50 dogs killed in a year equals killing about one dog a week. It's also about a 9% kill rate which about 91% save rate - which should be good - but there's also that other statistic - the turning over to rescue rate - 50 dogs - which you'd think is also fabulous - but it's my understanding those are dogs who are pulled by people who are close to Homeward Bound who just happen to also have rescues who see dogs in the pound who are going to be killed - so instead of seeing them killed needlessly pull them.

What I'm saying here is going to be controversial and is going to raise shit, but I don't really care, people are going to say I'm wrong and I don't know what I'm talking about, that it's not true - but I'm going to say it anyway because it needs to be said by someone - because this is not how you run a pound, it's not how you run anything. And this burden should not be put on anyone - least of all a rescue that doesn't have the resources of a corporation that is taking in 2.3 million dollars in 3 years.

There. I've said it.

So that's why I have lumped those 2 numbers into one - so that's why I am giving Homeward Bound a failing grade in their euthanasia statistics - because if they didn't have people working very closely with them who were willing to pull dogs that they knew were going to be killed they would NOT have their misleading "no-kill status" euthanasia numbers.

That raises the question of - what is their temperament testing like and how often are they willing to fail a dog - but still let it go out to a rescue for some reason.

It lets a dog live - but it means their temperament testing is completely meaningless.

Are they letting dogs go not because they were deemed unadoptable but because they were just languishing in their cages and were going unadopted?
Then that's a huge failure on the part of Homeward Bound - they should be doing more to get dogs adopted out - it's not rocket science - and they're certainly being paid enough money by the city to implement programs to get the animals to the people - it shouldn't be offloaded to a rescue that is doing bottle drives to try and raise funds to save dogs.
The 62% being reunited with their owners really has nothing to do with Homeward Bound as far as I can tell - that's a function of Animal Control - so I'm not going to speak to that.

That is the only way to run a pound. It should NOT be contracted out. Ever. Not to an SPCA, not to a corporate entity. It should be city department. That is the only way it can have any hope of being answerable to the taxpayer. And we won't have problems like we see here in Halifax, and in Montreal. And it's not me who has thought this idea up. People way smarter than me think this too.

So do you want to know what the city told me about my last question - the one where I asked them how they made sure that Homeward Bound was treating the animals in their care with compassion and humanely?

Here is what they said.


"This is a contractual obligation that has to be met by Homeward Bound City Pound".
Enuf said. 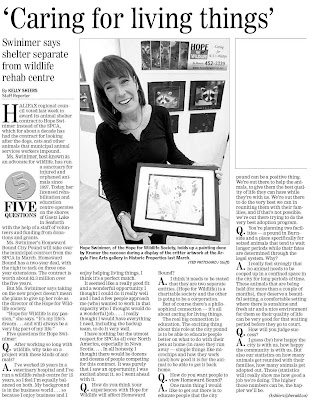 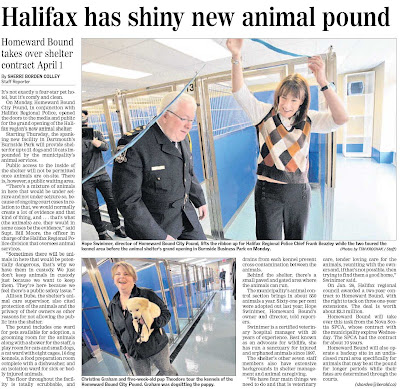