So it turns out she was looking for some beer.

All of the events that have transpired since March 26th - the tragedy of the attack on Ms. McIntosh, the spectre of bsl in Yarmouth - the ramifications of that happening - are all because she was thirsty, and she thought she could find some at Gary Wood's house - whether or not he was home - she didn't seem to have worried about.

and I would like to interject here that it doesn't matter what breed of dog was behind that door - it doesn't change the circumstances of the day, it doesn't change the fact that dog's owner didn't feel the need to lock his door, it doesn't change the way that the owner trained or treated his dogs so that they acted in such a way to behave so aggressively towards a person entering the house uninvited - all those events would probably still have happened even if it wouldn't have been a pit bull type dog - it could have been a tosa inu, or a presa canario, or even a black russian terrier - the day would have ended the exact same way. That is why breed specific legislation does NOT work.

I really hope they have some good conversations tomorrow night.

The question I'm asking myself is - is Noella McIntosh a victim? If and when the case goes to court - I hope the following questions get asked -

If any of those questions were no - then did she think that he would mind her taking his beer? She had to know he had the dogs, were they usually just kept in one room - and did she know that?

Was the beer important enough to her that she took on the likelihood of getting attacked?

If these questions aren't asked - then there's something wrong in my mind. But I'm not the judge, that's for sure.

Below is the article from the paper - I'll let you do some judging...

ps - I hope Mr. Woods has started locking his doors. 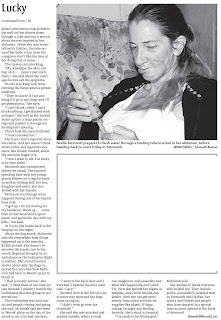 It wasn’t so very long ago that she doubted she’d live to see another day.

McIntosh was attacked by a big, pit bull terrier-type dog on March 26, when she poked her head through the door of Gary Woods’ place and yelled out one word — "Gary."

She turned to see a couple of dogs bounding up a set of stairs.

McIntosh, 45, was mauled by at least one of Woods’ dogs. It went for her throat, tore at her lips and opened a hole in her cheek.

McIntosh was hospitalized in Halifax for a few weeks but is back in Yarmouth. She is working hard to regain her independence.

"I can walk. I can do everything except eat," she said Friday, speaking publicly about her ordeal for the first time.

She still spends her nights at Yarmouth Regional Hospital but gets out on day passes.

Friday she lay on the sofa in her boyfriend Arnold Evans’ apartment. A plastic intravenous bag tacked to the wall fed her dinner down through a tube and into a special shunt doctors inserted in her abdomen. When she was hospitalized in Halifax, the tube entered her body at her nose but caregivers don’t like the idea of her doing that at home.

The reasons are shocking.

"My windpipe, the skin, the flap on it . . . mine’s just stuck there," she said about the cartilage doctors call the epiglottis.

Its role is to keep food from entering the lungs when a person swallows.

"They’re scared if I eat anything it’ll go to my lungs and I’ll get pneumonia," she says.

"I can’t drink coffee. I can’t drink nothing. I get flushed with syringes," she said as she sucked water up into a large plastic syringe and pushed it through her feeding tube opening.

That’s how she stays hydrated.

She hasn’t had a cigarette since the attack. And she doesn’t think about coffee and cigarettes anymore. She thinks, instead, about life and how fragile it is.

McIntosh was unemployed before the attack. She enjoyed spending time with her young grandchildren on a regular basis as well as visiting with her son, daughter and sister. She also visited with her friends.

McIntosh ran through what happens during one of her typical days now.

"I get up. I do my feeding for my breakfast. Wash up . . . come here (to her boyfriend’s apartment) and spend the day with my kids," she said.

At 8 p.m. she heads back to the hospital for the night.

About the dog attack, McIntosh said she remembers how things happened up to the time the RCMP arrived. She doesn’t remember the frantic run to Yarmouth Regional Hospital in an ambulance or the helicopter flight to Halifax. She’s heard several stories about why the dogs attacked her, tales like how McIntosh had been at Woods’ place to break in.

"That is totally untrue," she said. "I lived there at one time for two months. I couldn’t handle the foolishness that was going on so I moved out."

The foolishness was loud music and people coming and going, she said. McIntosh said she went to Woods’ place on the day of the attack to see if he had any beer.

Another door at the foot of a set of stairs was open and the dogs came racing up.

"I didn’t even go over the threshold."

She said she was attacked and pushed outside, where at least one neighbour and passersby saw what was happening and called 911. Now she spends her nights in hospital, away from friends and family. Until she can get extra money from social services for supplies like plastic IV-bags, tubing, syringes and feeding formula, she’s stuck in hospital.

She wanted to thank everyone who helped her. They include police, paramedics, hospital staff in Yarmouth and Halifax, her family and friends and people who have donated to a special trust account opened at the Bank of Montreal.
Posted by Joan Sinden at Sunday, May 08, 2011