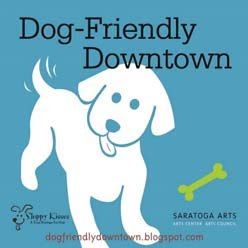 I subscribe to a google alert for "dog friendly" - and an article about "Saratoga Springs Dog Friendly Downtown" came through a couple days ago - and it's a fabulous initiative that the city of Saratoga down in the States has.

A whole bunch of businesses have realized that dog owner's really do love their dogs - and they love to spend money and be with their dogs at the same time - so they've banded together and made their businesses pet friendly - and put up logos on their doors - they have special events for pet owners - and fun stuff like that.

They have a blog at http://dogfriendlydowntown.blogspot.com/  and right now they're having a scavenger photo hunt for pet owners to bring them into the member businesses. Doesn't that sound like fun? 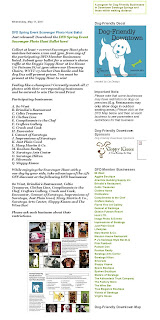 When I went to the blog it struck me - the number of businesses that they have participating doesn't sound like too many more than I have listed on my website as being dog friendly JUST in downtown Halifax - NOT including everywhere else in HRM. Altogether - there's over 150 resources and dog friendly listings on the Charlie loves Halifax site now - and there's TWENTY-SEVEN dog friendly stores in the downtown core of Halifax.

I'd say that Halifax is doing pretty good as a dog friendly destination.

If those businesses got together and actually catered to the dog owners that they're attracting to their stores - they could actually make a lot more money - and we dog owners would have a lot more access to fabulous services - and be spending more time with our chosen life companions.