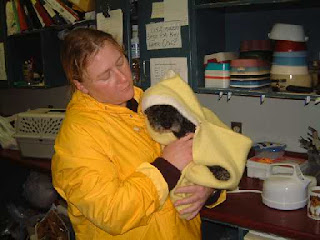 In January of 2010 I wrote a post called "Think Lost, not Stray" and the "Missing Pet Partnership" - and it was about changing people's mindframe's about the idea of stray dogs - that most of them aren't "stray" - that they are just "lost" - that if they could be reunited with their owners - we'd save the shelter system a lot of time and money.

In the post I said that 75% of the dogs that had come through the SPCA were stray dogs - so if we could have reunited even 40% of those dogs with their owners - that would be a huge difference in the amount of animals that the shelter system would have to deal with.

Until now there's never been a real way for owners of lost pets to congregate and find a voice to look for their lost pets - and the Nova Scotia Lost Pets Network has given them that voice - and I think that's awesome. The group is giving pet owners the tools to actually go out and find their pets - and families are being reunited - and I'd bet it's happening like never before.

Mistakes happen - gates get left open - pets bolt - but Nova Scotian pet owners now have been given a great network to get pets back home with the Nova Scotia Lost Dog Network. They are on Facebook - and they also have a website.

What would be really great is if every town's animal control department developed a relationship or link with the group so that if they picked up an animal - they could check with the group to see if an animal had been reported to them. Most town bylaws have a 48 to 72 hour limit before they're allowed to either kill or otherwise dispose of an animal in Nova Scotia, which isn't very long - it'd be so much easier if there was a central spot like the Nova Scotia Lost Dog Network as a reporting function for lost animals that AC Departments could check when an animal was impounded. But a person can dream, can't they.
Posted by Joan Sinden at Wednesday, February 23, 2011