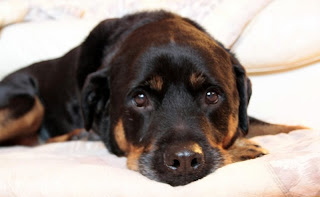 This is a hard post for me to write. I have known Ursa pretty much her whole life, and today she died. 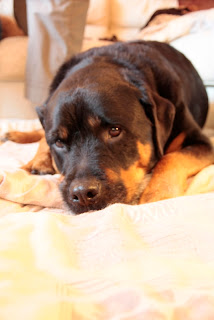 She was only 8 years old - a purebred rottweiller - who had the highest and best quality veterinary intervention and care for the entire time that she lived, and she was let go by that same veterinary team in the comfort and safety of her own home - surrounded by the dogs and smells and family who loved her for the - mostly painful - life that she lived. 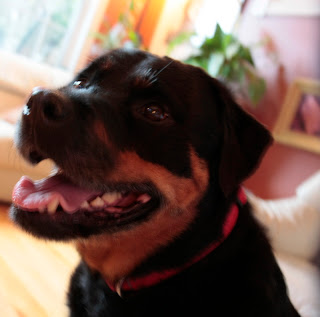 My deepest condolences go out to her Mom Janet Chernin and the 2 people who took care of her and own her brother and sister - Mark and Bena - they are currently devastated that Ursa was given such a genetically bad body. 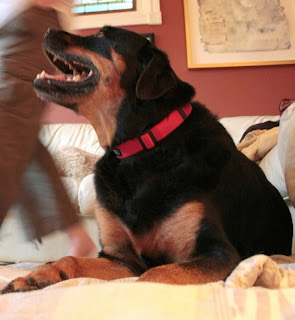 Ursa had all the best personality qualites of the rottweiller breed - she was gentle, loving, patient - she had the most beautiful eyes that looked deeply into yours and felt like she was trying to tell you something important - and the best thing - she had the cutest wiggle butt that only docked tail breeds can show you. 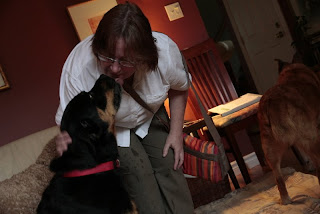 But also unfortunately for Ursa - she had all the physical problems that large breeds can have - her anterior cruciate ligaments - almost from the beginning - were a problem, and by the time she was 2 years old - she was toe tapping, and by the time she was 4 - both back legs were done. One ACL was done the old fashioned way, and the other was done via a TPLO - total ACL replacement - which means that once it's done there's nothing else you can do. And for Ursa - her back legs never really got better, and hers was a life spent in pain. 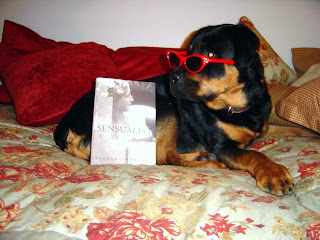 Ursa was very stoic though - and soldiered on - but her Mom Janet knew that Ursa was in pain - and sent her to stay at her friends Mark and Bena's house - because they live on one level - and Janet's house is on 3 levels - so a lot of the time Ursa didn't get to spend at home in the end - which was really hard for Janet I'm sure, but she knew it was best for Ursa.

Ursa was certainly full of personality - as full as all the dog's in Janet's house - she had a thing for stuffed toy animals, she'd tear all the stuffing out of them - and this is the only time I've ever seen Janet be patient - Janet would actually let Ursa do it (people who know Janet would be equally amazed) - Janet actually indulged Ursa - she'd let her take the stuffees out of the toys - and then give her back the unstuffed animals to play with. I used to buy bags of toys at Frenchy's for a couple bucks and take them over and Ursa could tear them apart one by one. 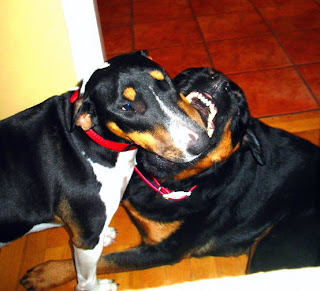 Ursa loved all the dogs in the house - but she and Pickle had a special relationship - they'd suck on each other ears - I'd imagine that Pickle will really miss Ursa. 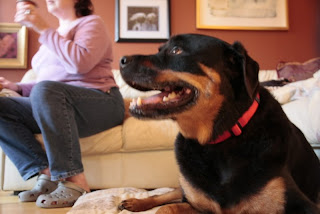 It's funny - almost all the photos I took of Ursa over the years - she's laying down in the them. In the end - her legs gave out - her front legs stopped working too, and her immune system started shutting down - so Janet let her go today. It is such a hard decision.

A dog can live really well with 3 legs, they can live pretty well with 2 legs - but with no legs - a dog can't really live anymore. Especially when they're in pain and there's nothing you can do but watch them be in pain.

When you choose to bring a purebred dog into your life - make sure you do your homework so that you don't cause yourself heartache down the road. Find out if the parents have been tested for hip and knee problems - and ask to contact other people who have purchased puppies from the breeders to see how other littermates have made out with their dogs. Any responsible breeders will be able to comply with your request.

Unless you're rescuing a purebred dog and don't have access to this kind of information and are willing to take on the risk of heartache down the road because the dog may have come from a puppy mill or back yard breeder - do your research - you and your canine life companion will thank you for it - and you'll both have many many years of pain free living - most probably.

Ursa didn't deserve to have such shitty body parts - she had such a beautiful spirit and personality - she deserved to live a long full life. It's such a shame that her body gave out on her only 1/2 way through.

Rest in peace, Ursa. We all miss you terribly, already.
Posted by Joan Sinden at Thursday, July 15, 2010