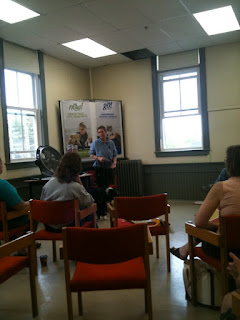 Today was the Stress and Aggression Seminar with Silvia Jay up in Mahone Bay, and I think anyone who was there would agree with me that it was absolutely fabulous. Jane Smith from Ditto's Canine Learning Centre was the organizer and she did an awesome job - the food was great, everything went off without a hitch - and 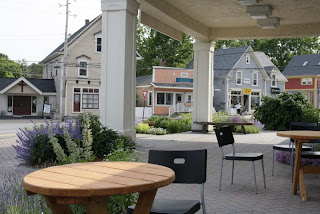 This was the 2nd time that Silvia has put on this seminar - but I think I could sit and listen to Silvia talk about anything that has to do with dogs - and everytime she talks it's in front of a different audience, and she is relating with the people all the time - so what she talks about is completely different everytime she speaks - so you learn great new stuff each time - which is wonderful.

I got to meet some new neat people - I had previously heard about the owners of the business "Golden Mountain Dog Solutions" - but they were at the seminar today - so it's always nice to put faces to websites and businesses you've seen in the past. And we had a 50/50 for SHAID - and raised over $100 - because the winner of the 50/50 - Karen Runge, who happens to be the breeder of the entlebucher Sante who I've posted lots of photos on this blog of (what a small world, eh?) donated her winnings back to SHAID - which was fabulous!

So what do I mean when I say that we learnt great stuff? Here are a couple little things that she said that I personally thought were great - the idea that fears are always learned - and that resource guarding is always fear based - but a dog may not always be aggressive about his toys and foods - he may be a control freak - and a control freak's guarding is anxiety based - so you've got to figure out where your dog is coming from before you can begin to fix him - and with resource guarding - the way you treat that is to convince the dog that there's no reason or basis for his fears - so you just need to never take away the things that he's guarding, you need do things like give him lots of food and make positive associations with it - but you can appreciate that with a control freak - he doesn't care too much whether there's tons of it around - he still wants to control it all - so you have to treat that differently.

She also talked about punishment training which was interesting - because I was just reading about that in an Ian Dunbar blog post a couple days ago which I'll give a link to - and she defines punishment training as - "something that the dog doesn't like and that has a lasting effect on behaviour" - so if you think about - a prong collar or shock collar generally is not punishment training because it "doesn't have a lasting effect on behaviour" - you continually have to use it over and over - in effect - you have to abuse the dog continually in order to make it work - the blog post that I read is at http://www.dogstardaily.com/blogs/non-aversive-punishment - and he talks about aversive vs non-aversive punishments.

The last tidbit I'll give is a great line that you can use for just about everything - and it is - "redirect - never correct". That is a great philosophy to have. Probably everyone in the room wrote that down when she said that! 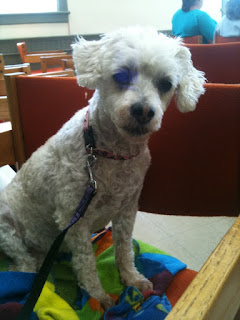 And I took Buttercup with me up to Mahone Bay - so we had a great day together - she had a good time spending time with me and I had a great time having her next to me all day. It was a lot of fun - and the people there got a lot of entertainment seeing a perfect little white dog acting like the worst little dog in the world whenever she saw another dog come into the room. 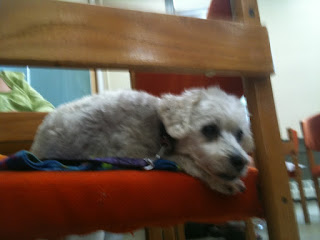 She is the most perfect dog in the world until she sees another dog - then she's all business - she has 190 or so pounds of real estate that she takes very seriously in keeping other dogs away from.

So we're both pretty tired tonight - but I think a good day was had by all - and now it's thunder and lightning outside and poor Charlie is afraid of thunder - so he's hiding in my bedroom - so he's had a pretty shitty day - hopefully he'll have a good day next weekend just like Buttercup had today.
Posted by Joan Sinden at Sunday, June 20, 2010

Email ThisBlogThis!Share to TwitterShare to FacebookShare to Pinterest
Labels: Buttercup, stuff to do coming up