Today the people who have been keeping vigil and working hard for a long time to give voice to the many puppies who have died silently because they were held in the ownership of Gail Benoit and Dana Bailey held a small protest in the middle of Halifax this afternoon for a couple of hours to raise awareness of the fact that the couple have moved their business to the Halifax area - so a whole new city of people who may not have heard about them may now be prey to their not healthy wares that they sell. 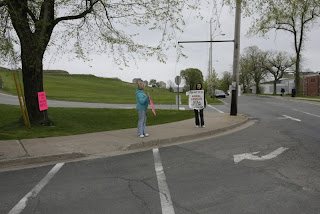 At the protest information sheets were being given out that I've put at the end of this post that outline what to look for when buying a puppy - ways to check if the puppy you're buying is healthy - or unhealthy - as often happens when you buy a puppy in a parking lot or the back of a car, which is where the Benoit's typically will sell you their puppies. They will also come to your house to deliver right to your door as well. 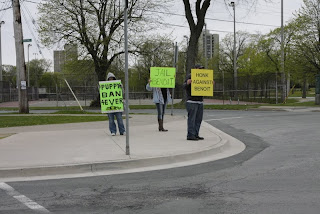 These guys are the core of the "puppies-r-us get-em gang" so they like to stay undercover if you know what I mean...


So today's event was good - some media showed up - tons of cars drove by - and there were 100's and 100's of cars honking their horns - every honk meant that someone got the message today - which was awesome. 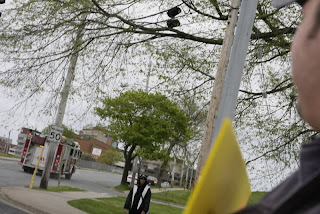 Even the fire truck honked at us as they went through the intersection!


A big congratulations goes out to the people who organized the event - it's the only way that puppy mills and puppy brokers will be shut down - by educating the public one person at a time. 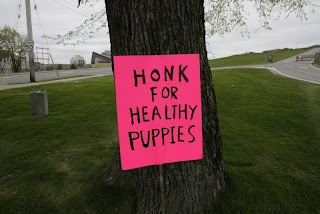 This was my sign - the other side said "up with adoption, down with parvo" - my Dad didn't know what "parvo" was.... I hope some of the people driving by knew what it was though!

The handout given out today - 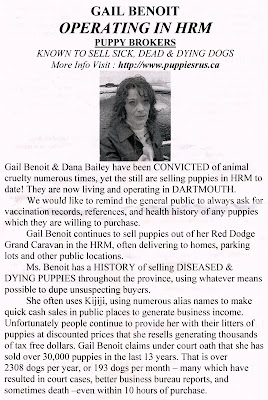 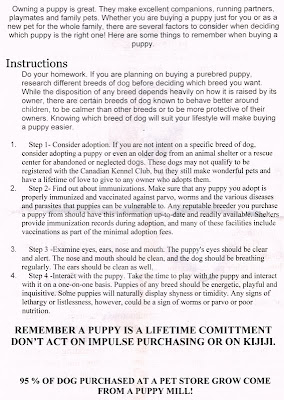 Here's the article that was in the paper on Sunday - 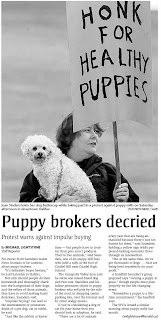