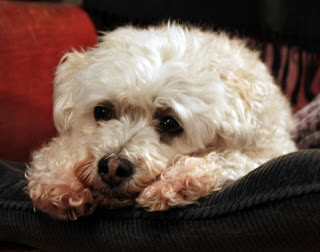 He very hurriedly took the petition that the Seaview people had been accumulating names on - a week early - almost as if he was trying to get it from them before they could get anymore names or organize it properly, and submitted it last night - but he spun it very negatively to council instead of spinning it as a positive thing for dog owners and other people who might want to visit Seaview Park - which was very - as I said above - disingenuous for all the hard work that the dog owners of Seaview Park have been doing, and the meetings they'd had with Blumenthal before. He appeared very two-faced at Council last night - that's the post I wanted to write tonight - but for some reason I couldn't get the Chronicle Herald website to come up to get to the article I wanted to talk about - so I'll have to write that post tomorrow night maybe - and we'll just have to satisfy ourselves with these photos of Buttercup for tonight - looking very petulant because she's not the centre of the universe for 5 minutes in a row. 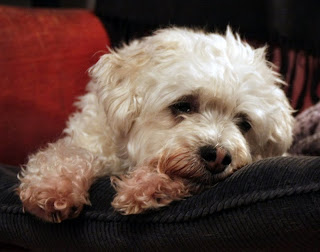 She doesn't like that when it happens too much - but sometimes the floors do need to be vacuumed and laundry needs to be put away - but I don't think there's a word in "dog" for laundry or "vacuum" so I haven't been able to communicate that effectively to her yet. I don't think she'll ever understand, and the price she makes me pay in sad looks is very high.
Posted by Joan Sinden at Wednesday, May 12, 2010