Today was the 133rd Annual General Meeting of the NS SPCA 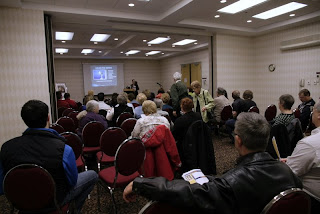 So today was the 133rd AGM of the NS SPCA. I almost didn't go. I was really tired this morning, and I was thinking to myself - what's the point, how is this AGM going to be any different than last year - or the year before. But I'm glad I did go - because it was different, a lot different. Today I witnessed a transformed Nova Scotia SPCA.

Today I saw a Society that has a direction, purpose, strategic vision, goals, a business plan, a marketing strategy - an organization that is finally being run like a business - and for the first time in the five years that I've been going to AGM's - I believe that the Nova Scotia SPCA is going to succeed in and thrive.

And it is completely and 100% due to it's current Board and to it's executive Director Kristin Williams and the current manager at the provincial shelter, Sandra Flemming. There is no doubt. 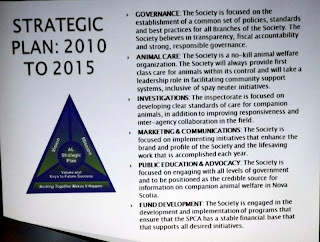 Kristin's and the Board's plans for the next year are nothing short of visionary. Their plans for fundraising are idea's that have never been broached by the Society before - and show that the NS SPCA has moved to a new level of charitable business approach - with a mix of community events and a major gifts program that is going to target a specific audience. Kristin Williams talked about having a program like this at the OSPCA where 400 people brought in $700,000 for that organization. Now THAT is fundraising. When she said that I turned to the person I was sitting with and said to her - "now that's why we pay people to work in position's like Kristin is working - you have to spend money to make money".

At the 2008 AGM Pam Keddy, then President of the NS SPCA said - "We don't have a Director for the Provincial Society – that costs about $60,000 or so which we never approved, part of that responsibility was we've operated for the last 4 or 5 years or so without a CEO to save costs so that the monies raised could go directly towards helping the animals which ultimately is what we're all here for."

Instead - the President of the Society acted in several positions, and it seemed like nothing ever got done. I am SO happy that this policy has not continued - and we now have people like Kristin Williams now working for the organization so that projects like the Major Gifts Program, the Executive Director presenting at the AGM's of the NSVMA AGM, and hopefully the Union of Nova Scotia Municipalities AGM - and the increase - probably in about 1000% in professionalism that the Society puts forward now, will continue. I really hope that we don't lose the fabulous resource that Kristin Williams has brought to the Society. 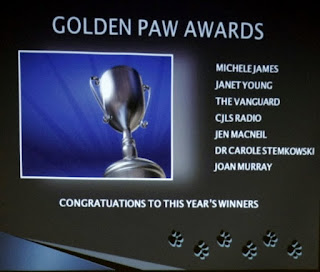 This year was neat in that they gave out awards to volunteer's for the first time - Michele James, Janet Young, who is the web master for the Nova Scotia Homeless Pet Project, the newspaper the Vanguard, CJLS Radio, Jen MacNeil, Dr. Carole Stemkowski, and Joan Murray - who is a great friend of mine. 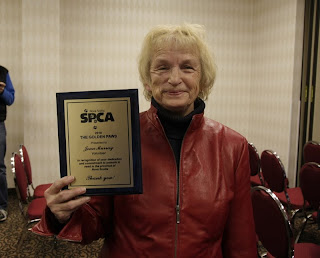 There were a couple moments at the meeting that weren't without a bit of irony - Joan Murray, who received one of the Volunteer of the Year Awards stood up at one point to mention the fact that at the AGM two years ago she tried to "crash the AGM" - and she and Maureen Tate were unceremoniously booted out of the meeting.

At the time me, Janet Chernin, herself, Maureen Tate, and a couple other people had all had our memberships to the NS SPCA revoked over the Celtic Pets debacle. We later all had our memberships reinstated and a public apology was given to us by the Board of Directors - but the irony today was kind of funny - that just 2 years later she could receive a volunteer of the year award.

And really, that is how far the Society has come. And the feeling in the room today was palpable. Even if public perception about the Society still needs work - the people at the core of the organization - know that good work is being done - and they are there for the long term. All the fluff and nonsense is gone.

Another interesting thing was that everyone was using the term "no kill" so naturally.

One of the first times I talked about the term on this blog was in a post back in 2006 - (the VERY FIRST time was way back in April, 2004) and it had to do with a post I was writing about temperament tests. The topic had come up on a Yahoo group that I belonged to at the time (that I also got kicked off of because of the Celtic Pets scandal - a rescue group called "Maritime Animal Rescue" that is owned by Pam Keddy) - and the fact that shelters were using their temperament tests to kill dogs.

I can pretty much guarantee you that pounds and shelters are probably STILL using temperament tests to kill dogs in 2010 - which is WRONG, but that's another post. But you can go back and read the post from 2006 - but it's still true today - and it's also one of the first times I talked about Nathan Winograd.

At the time nobody would have ever heard about him - but today, everybody knows who he is.

I did want to talk about something though at this point - and that is the actual adoption of animals in the no-kill world of the SPCA. It's because of an email I got a couple week's ago -

"Well, it's hard to believe that with all of the rescue groups and internet twaddle and supposed anxiety to place dogs, that I can't get a rise out of any of the NS or NB shelters and groups about specific dogs on the web or adoptions in general. I'm looking for an overlap dog but I have no doubt as to why people go to pet stores and puppy mills,etc. It's because they can't get an answer. It's incredible that nothing seems to have changed since the fall of 99 when I got D.... I think part of the problem is that, unlike the animal shelters in New york (check out those in Brooklyn where the animals are on a fixed time limit before being killed) animals hereabouts can live in the shelter or foster care forever and no one gives a rat's patoot. Anyway,I meant well.Who needs to give a dog a safe,caring home anyway?"

This email came from a very good friend of mine who makes a very good salary, takes his dog everyday, 365 days a year to an offleash park for at least an hour, is crazy about keeping his dog healthy - he lives for his dog - so he is the best kind of dog owner. And he is being completely frustrated by the shelter system. And he is not alone.

Adoption policies in rescue - needs to be as good and easy as it's fund raising is. That has to be another key to a no-kill society - or people like my good friend WILL go to a pet store. And he KNOWS where pet store dogs come from.

So as the NS SPCA does amazing things with their strategic plans - I really hope they don't forget about the front lines - and the people adopting the animals - and the day to day, moment to moment stuff. Because that is just as important.

And in the long run - that is going to be the thing that is really going to change the public's perception in a positive way - in my opinion, for what it's worth, and I know that is not much. 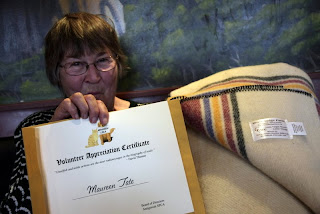 Also today, the good ladies from the Antigonish branch of the SPCA acknowledged all the hard work that volunteer Maureen Tate does for the SPCA, and particularly does for their branch and they gave her a really nice certificate and a REALLY nice wool blanket that's made a company local to their area. I totally lust after those blankets - and they know it! haha!

2006 AGM - Lisa Murphy was president for a year and we thought everything was going to be okay again
Posted by Joan Sinden at Saturday, April 17, 2010

Email ThisBlogThis!Share to TwitterShare to FacebookShare to Pinterest
Labels: No kill philosophy, NS SPCA, stuff to do coming up