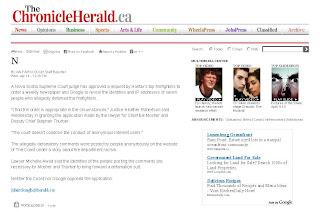 Assholes of the world, beware - being anonymous won't cover your ass anymore, unless you're really smart.

The Nova Scotia Supreme Court has ruled that the Coast Magazine and Google must cough up the email and IP addresses of anonymous posters who said potentially defamatory comments on a Coast Magazine article that were racist in nature.

I say - more power to them, as a person who's been the subject of defamatory comments spread on numerous places across the internet. When people post anonymously - they think they can get away with anything - that's why I finally stopped allowing anonymous comments on this blog a few weeks ago and it's the best thing I ever did. I used to have to read so many horrible comments - and none of them ever made it to the blog, but I still had to read them all and delete them - but now none of them ever get typed out because the people know that somewhere - an email address has to be attached to them.

IP address tracking is useless - because you can hide your IP address really easily if you have any kind of computer knowledge - and if you're going to be seriously nasty - I've found that when I've gotten my nastiest threats on this blog - almost all of them have used anonymous IP addresses to make them with - so probably the firefighter group will find that also. They may come up with dead ends anyway.

I don't know where anonymous commenting came from anyway - down in the States, they are thinking about stopping it altogether, and there's even a case of a Judge who's been caught making over 80 anonymous comments on newspaper articles about cases that she's presided over - causing HUGE ethical problems, as you can imagine.

I hope the firefighters get some closure. Anonymous commenters are nothing but cowards. If you can't put your name behind what you're saying, then shut your fan-damn mouth.

Email ThisBlogThis!Share to TwitterShare to FacebookShare to Pinterest
Labels: articles