So this week the Nova Scotia Veterinary Medical Association banned their members from doing "cosmetic procedures" like docking the tails of dogs and cropping their ears. It'll come into effect in October of this year.

It's funny that they banned those 2 things. I don't really understand it. I guess they're still going to do things like debarking, declawing cats - removing declaws on dogs and stuff like that. The purebred dog community says that they're doing it to cow tow to the animal rights community - but I'd say if they were doing that then they should go all the way and also ban the practice of artificially inseminating dogs and cats - now THAT would REALLY cause an uproar in the purebred dog community - because it seems like that's how almost all conception takes place now with purebred dogs. It's too much hassle for purebred dogs to actually mate naturally anymore - too "messy" - so artificial insemination is the way to go all the time - although I think most breeders actually do it themselves, and don't include vets at all. But to ban that by vets - now THAT would really be something the animal rightists could really get behind, I'd imagine. 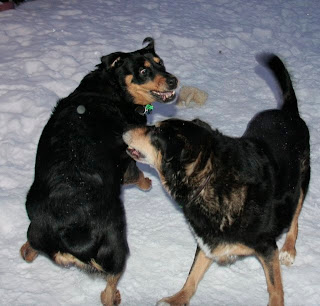 Daisy is a perfect example of things like tail docking shouldn't be banned by veterinarians - because her tail isn't docked - it's AMPUTATED. It very obviously was not done by a veterinarian - it was done by someone who just happened to be nearby whenever her mother gave birth. 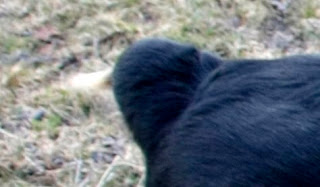 It's got a big tuft of hair that every so often I cut off so that she looks like a proper rottweiller for a little while.

I think about it like men and circumcisions - they don't really have a choice in it - it's done when they're a few days old, and now it's not even done for religious reasons - and I think a lot of jewish people don't even get it done. But it's the choice of the parents - its part of their culture, what they want for their children - what their beliefs are - how they were brought up themselves - how their own bodies look and they want their children to look.

And it's none of my business as to whether or not your child has a - flap over the end of his penis. My personal preference doesn't come into play - why should it have any sway over your dog?

On the other side of that - we can't force a veterinarian to perform a procedure he doesn't want to do - but I don't think the Veterinary Association should be banning their members from being able to do the procedures either. That is wrong - and I think the members should be standing up. That sucks too. I hope the members are speaking up. Especially if they want to continue making money. 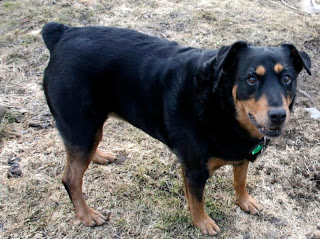 Because I don't want any more tails like Daisy walking around Nova Scotia. I've gotten used to Daisy's - but I'm sure she'd rather hers be unique to her.

Veterinarians in Nova Scotia will no longer cut the tails and ears of dogs for cosmetic reasons, prompting an outcry from some breeders.

Veterinarians say docking a Doberman pinscher's tail, for example, is unnecessary and cruel.

"In my opinion, Dobermans and Great Danes look great with their ears down and their long tails, so there's no reason to mutilate them by causing them to meet an arbitrary breed characteristic that has been around for so long that we can't remember why it's been around in the first place," said Dr. Frank Woodbury, a veterinarian in Halifax.

Mary Spinelli, a Doberman breeder in Dartmouth, disputes any suggestion that ear cropping and tail docking is cruel, and therefore can't see any need for the new rules.

"There was no impetus from anybody in the dog community to say, 'Please, consider this procedure,'" she said.

"These procedures have been performed for the better part of 100 years. They're not new, they're not revolutionary and, by and large, they're not cruel. They're done in proper conditions."

Spinelli said a Doberman's tail is removed when the animal is about two days old, while the ears are cropped at eight weeks.

She finds it hypocritical that the veterinary association is still allowing the declawing of cats.

"They have no qualms whatsoever about declawing cats, which is a far more invasive procedure done when the cat is significantly older," she said.

The new rules go into effect on April 1, though they won't be enforced until October. Similar bans on cosmetic surgeries are already in place in New Brunswick, Prince Edward Island and Newfoundland and Labrador.

Spinelli, a registered breeder with the Canadian Kennel Club, won't crop the tails of her dogs herself. She said the procedure should only be done under safe and clean conditions, like with veterinarians.

Another Doberman owner, Lendra Barker, fears that some owners will do whatever it takes to get their dogs to conform to a certain look.

"The people who own these dogs want them performed and without a vet to be permitted to perform these procedures, where is it going to go? Some people that aren't reputable may end up doing it themselves without the benefit of anesthesia or sanitary conditions," said Barker, a past-president of the Doberman Pinscher Club of Canada.

Non-veterinarians who attempt the surgeries on their own could be charged under Nova Scotia's Animal Protection Act.