Dog freezes to death on end of chain in Cape Breton 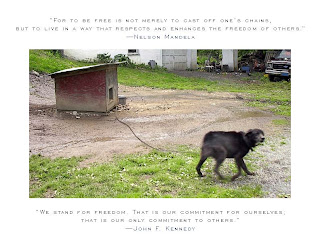 This should not be happening in 2010. Don't you think that we've advanced enough in society, that we've realized that if it's -20 degrees celcius plus a windchill, and you've got a dog tied outside with a coat that has really short hair - that if you leave him outside 24 hours a day - that they are going to die if you leave them out there? And that if there was water in a bowl out there - that that water has frozen and the dog now doesn't have any potable water to drink? And that means you're now abusing the animal that is living on whatever piece of property that you've put them on?

I have never doubted that people are willing to abuse, hurt, and otherwise beat up their animals - they also do it to their children, their wives and their husbands - so why wouldn't they also do it to something that absolutely can't fight back - animals are so easy to control - that's why animal abuse will never end. But when we see such blatant examples of it - someone finding a dog who has frozen to death on the end of a chain - it's just so - chilling.

It's also changed my mind about something. Up until now I've always been against anti-tethering legislation. I've seen it as being useless because there's no use in having laws that can't be enforced - it's much better to just enforce laws that are already in place that are good enough.

But this story has really hit me - especially since the NS SPCA has said that they have had complaints about this dog - and said that the owner had been meeting minimum requirements - so they couldn't do anything about his situation.

But maybe if we would have had anti-tethering legislation in place - legislation that said you cannot tie your dog out 24 hours a day - maybe then dogs like this would not die.

This doesn't mean you can't tie your dog out. Brenda Potter - you will still be able to tie your dog out! But good anti-tethering legislation gives authorities the tools to not let people abandon their dogs so that they can die like this dog did. It's as simple as that. People should not be afraid of anti-tethering legislation. It's a good thing. And I think it's time the province of Nova Scotia had some.

So stay tuned. If you feel inclined you can join a Facebook group called "Break the Chain in Nova Scotia" - it's somewhere to start, and we'll get going from there. 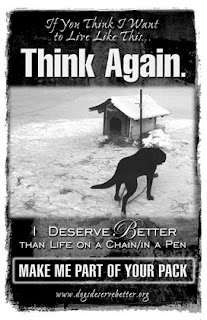 I've had this poster hanging in my living room for a couple of years now - it's a promotional poster for Dogs Deserve Better - and it is SO true. February 8th - 14th is a national campaign called "Have a Heart for a Chained Dog Week" - the organization sends out thousands of valentines to homes across North America that have dogs chained in back yards asking them to think about the animals they have back there and whether they might bring them inside as family members. 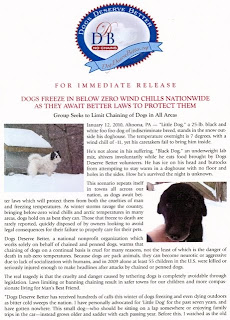 As well - we have a press release and video on our website that talks about anti-tethering legislation, and the fact that dogs are dying all across the country while we wait for action to happen. You can see the video here - http://www.youtube.com/watch?v=ixSHKjoWuz4&feature=player_embedded or on the main page of DDB's website - http://dogsdeservebetter.org/index.html 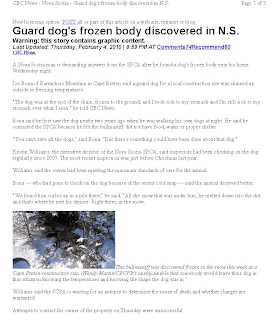 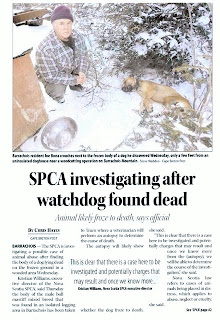 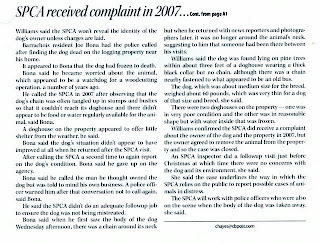