What's up with the Yarmouth SPCA?

I got an email today that the Yarmouth SPCA seems to have had a kitten taken away without having had the "proper paperwork" filled out for it before it left the premises. In other words - it seems to have been stolen, but they aren't quite coming out and saying that. They are saying -

"The Yarmouth SPCA is concerned about the whereabouts of a visually impaired kitten that was taken from the shelter without completion of proper adoption papers on the afternoon of Wednesday, Jan. 20." 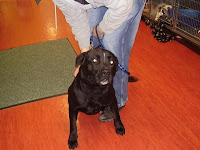 This worries me - because in 2008 - a dog was stolen from the Yarmouth SPCA - I wrote about it in a blog post back then. Luckily the dog was found and returned - but it's just weird that this has happened twice at one shelter.

I don't know if that end of the province just has a weird relationship with their animals in general - back in 2006 some members of the town council tried to ban dogs from the downtown core altogether because young men were bringing their "scary looking dogs downtown" and dogs really shouldn't be out in public anyway. That was just foolish what they were trying to do, and I'm glad it never actually happened.

I hope the kitten turns up okay.

The Yarmouth SPCA is concerned about the whereabouts of a visually impaired kitten that was taken from the shelter without completion of proper adoption papers on the afternoon of Wednesday, Jan. 20.
“The kitten’s well-being is our utmost concern,” said president Frieda Perry.

“We welcome the opportunity to ensure the kitten is healthy and is safely returned with no questions asked.”

Flower is a domestic medium-hair, white, grey and black tiger. She is small and only three-months-old.

Anyone having information on this kitten is asked to contact the Yarmouth SPCA at 902-742-9767
Posted by Joan Sinden at Friday, January 22, 2010