I have been watching the events unfold after the earthquake in Haiti just like everyone else around the world, and have been as heart sick for the people there as everyone else. The fact that at least one of our own citizens - very well known local RCMP officer Mark Gallagher died during the earthquake has personalized the disaster for Nova Scotians and made coverage of the aftermath even more reason to follow what's going on down there.

I tend to not get my news from the television except for local nightly news. I get my news from newspapers, online newspapers, news blogs, blogs, Twitter feeds, and things like that - so yesterday when I saw a You Tube video of Anderson Cooper from CNN going from reporting the news, to taking part in the action - and saving a young boy's life in Haiti - I was really struck.

It struck me, because it reminded me of another photographic journalist from a few years ago - and his name was Kevin Carter, and he took a very famous photo that I've posted below. And his photo changed my life personally, and I think it changed a lot of people's lives at the time - and it changed his life so much that he eventually committed suicide. I wrote a post about the photo back in October, 2005 when I discovered the photo.

The dichotomy of the two journalists - Kevin Carter, and Anderson Cooper - is what has compelled me to write this post, though. And I wonder if in the 21st century - maybe this is where journalism is heading - and maybe that's not such a bad thing, because maybe this is where our society is moving towards too - taking an active approach too what's going on around us - because we just can't stand to stand by and just bear silent witness to the atrocities that are going on around us anymore. 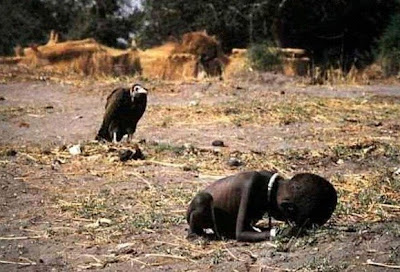 Back in 1992 - Kevin Carter never did anything for that poor starving child who was so close to a feeding station - he could have picked her up in his arms and carried her so that she lived - but we will never know what happened. And his inaction - and having witnessed that kind of suffering over and over through his lens, and maybe never having done anything abou it time after time - ultimately killed him. 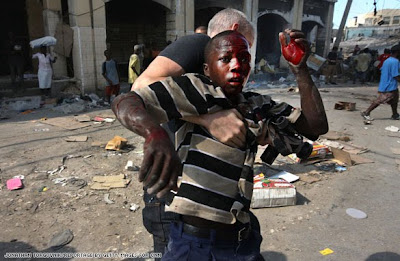 But Anderson Cooper - seeing a child suffering right next to him - immediately acted. He didn't act like a journalist and just immediately start filming - and not help the child - he helped the child. And if you notice - he also left his camera behind to continue to help the child.

I hope HE gets a pulitzer for what he's doing down there in Haiti. I think he deserves one.
Posted by Joan Sinden at Friday, January 22, 2010