I just read this on the internet - 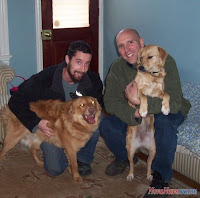 Mark Reid and J.C. Mongiat of Annapolis County, made a special trip to bring Daisy and Misha back to the U.S. in time for the holidays

A magic bubble of good weather and the kindness of strangers got Misha and Daisy home in plenty of time for Christmas.

Daisy, a two-year-old Mountain View Cur, and Misha, a nine-month-old Nova Scotia Duck Tolling Retriever mix were stranded in Cape Breton after their owner fell suddenly ill and was rushed back to the U.S. for treatment.

The two unlucky dogs were handed over to the SPCA and then stranded again with a different rescue group. It wasn’t until J. C. Mongiat and Mark Reid of Annapolis County volunteered to drive the dogs from Sydney to Philadelphia that the dogs were able to return home shortly before the holidays.

Monique Kuschel, from Philadelphia, U.S. had been working as a caregiver in Cape Breton, when she needed to be hospitalized on November 29. Kuschel’s partner Rhonda Morgenstern contacted Kuschel’s bedridden client and assured him she would arrange to get the dogs, but she would need time to get everyone safely back to the U.S..

It was too late in the year for the dogs to fly home with Kuschel, so she needed to make other arrangements. However, on December 2 the dogs were turned over to the SPCA. Morgenstern contacted the SPCA and with the help of her mother, found Caper Kennel where the dogs were moved the following day.

A desperate plea was posted and circulated among various rescue groups. Lee Anne Tibbo, of Boxer Rescue Atlantic Canada organized a transport team to take the dogs back to the states, but the dogs’ paperwork didn’t arrive in time and so the plan fell through.

Helen Barrowcliffe and Fred Goldberg of Montreal-based Basset Hound Rescue were making arrangements to get the dogs -- a 1,900 mile rount trip -- when Nahleen Ashton, owner of Goshe Pet Care and a Companion Animal Protection Society volunteer, read the desperate plea being circulated.

Ashton’s husband J. C. Mongiat told her that if Morgentstern would cover his costs, he would make the trip to Sydney to pick up the dogs and then drive them back to the U.S.

“He said he just felt bad for the dogs,” she said. Mark Reid, a close friend, offered to join him for the drive. The two Annapolis County men picked up the dogs on December 17 and hoped to be back home sometime on Saturday.

They’d been given a list of information about the dogs; things to watch, ways to comfort them on the trip, but Ashton said the dogs just settled down quietly in the back seat and didn’t stir. About three blocks before they’d reached home, Daisy and Misha woke up and the tails started to wag.

Ashton added she was keeping one eye on the weather network as a severe storm seemed to be trailing them. Somehow they all managed to stay ahead of the inclement weather and Mongiat and Reid arrived safely back in Nova Scotia on Sunday, just before the storm blew in.

“It’s like they were in this little magical bubble of good weather,” Ashton said.

Rhonda Morgentstern said that Monique, Daisy, and Misha are all happy to be home and are now doing well. She added that she is amazed at the goodwill of strangers.

“Never have I felt more blessed,” she said. “When this all started November 29th I knew no one in Nova Scotia and frantically tried to make long distance arrangements for everyone. I am so impressed with the rescue organizations in my neighbour to the north and am so grateful to the many people involved in making this an extremely happy homecoming.”

By Heather Killen
Posted by Joan Sinden at Wednesday, December 30, 2009