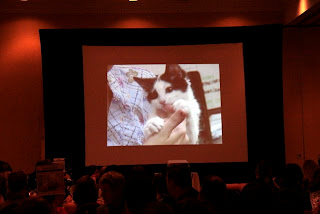 In the category of "better late than never" - I'm writing up going to the SPCA's Cause for a Paws 2009 - I didn't do it earlier because I was tired the night I got home from the event, I was feeling a bit lazy, I couldn't find the pamphlet that I got from the event, which annoyed me, etc. - so long story short - I didn't get around to it. But then yesterday I get an email from a friend of mine who says that this year raised an amazing - $29,589.59 - can you believe that? Imagine what organization it took to raise that amount of money from an auction and a silent auction in one evening - so when I read that, I knew I HAD to write about it. Such KUDOS to the organizers of the event! 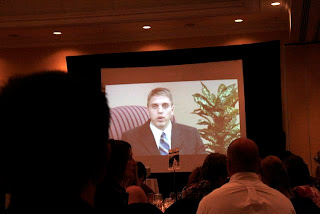 This year was entirely different - that's for sure - for one thing, this is the first year that I actually had to buy a ticket! Every other year there was always free tickets floating around so that I got to go for free and then just spent my money on the auction items - this year I had to spend money on both! And the event was sold out weeks in advance - so that says something about the planning of the event. The President of the NS SPCA - Sean Kelly - is in the Navy - so he's away at sea for 6 months, and his message was on videotape - and the tone was different than in past years - the focus of the SPCA seems to be moving towards Investigations - and generating funds for that - which is interesting. 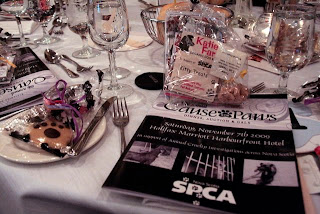 That was also the tone of the materials handed out, and other video shown at the event - which, when I was thinking about making my post about the event, I was going to comment about - which in some senses - I think is a good move for the organization - focusing on what the SPCA should be about - acknowledging that Investigation of cruelty is what they are here for - and fundraising for that is totally noble - and it appears that people ARE willing to give them money for it. Which is super! 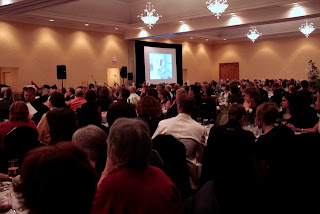 A shot of the audience - according to the seating chart 350 people bought tickets - cha-ching! 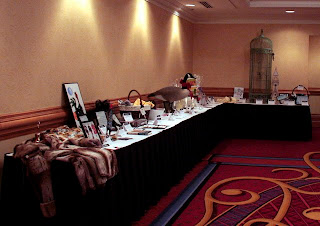 The auction items were great, and very worthy of being auctioned off - and the auctioneers were amazing! I can understand how they raised so much money - there were 3 auctioneers and 2 of them roamed the audience and they would stand in front of you saying "come on, you can go $10 more" - and then when the other auctioneer did that to the other person up-bidding you - and they went $10 more - the auctioneer would do that to you again - so you'd keep going up and up - it was awful!! For you wallet anyway! haha! But it was good for the SPCA! 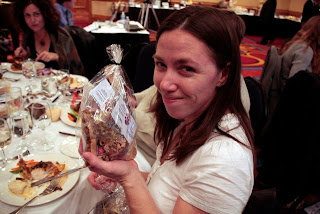 This is Amy modelling the "swag bag" that was at each table - it was a very shi-shi event - you should definitely go next year if you want to have a good time! I'm sure a good time was had by all - I know I had a good time, and I know everyone at my table had a good time