Today I bought my plane ticket, booked my hotel, and bought a ticket to the No More Homeless Pets Conference in Las Vegas going on October 23 - 25, 2009 - so my Nathan Winograd stalking is going to be able to be continued for a little while longer.

I've got the sessions picked out already that I want to go to - and there's all kinds of other spectactular people going there to be speakers - along with people from the Best Friends Animal Sanctuary as well - there's one session called "DogTown's Secret Sauce: Training Tips and Personal Recipes for Problem Dogs from DogTown Trainers" that sounds really neat - and Bill Bruce from Calgary is going to be there too.

He came to Halifax a couple years ago, and I've heard him speak a couple of times, so I'm sure he's going to give a great talk there too.

I'm going down a couple days early so that I can have enough energy for the 3 days - and see what Las Vegas is like - that is going to be amazing. I cannot wait! I can't believe it's 2 whole months away!

I have wanted to go to this conference for years - and since this is the 25th anniversary of Best Friends - this year is going to be extra fantabulous - so if there was any year I was going to go - this year had to be the year. So I am super happy that I'm getting to go. The 10 hour flight though - I'm not so happy about - but I'll deal with that at the moment the airplane takes off! But that's why I'm going down early - so that I'll be over the jet lag by the time the conference starts...

When I was looking at the conference speakers one of the people's titles sounded interesting - it was "Susan Daffron, Founder, National Association of Pet Rescue Professionals" - and I'd never heard of the organization before, so I googled it and went to their website - and it looks like a neat organization - and one of their "vendor members" is a company called "Walk your dog with love" - and he's got a page on his website with little video clips of people who've bought his front walking harness - and there's some beautiful clips there because 3 of the people's video clips were using prong collars - but this guys harness worked SO MUCH BETTER - that they were going to use his device instead of the prong collar - now THAT'S a product I can get behind! He also has a program that is a money maker for shelters where all profits from his harness goes to the shelter that sells them - so "Walk your dog with love" - is a great product all around. 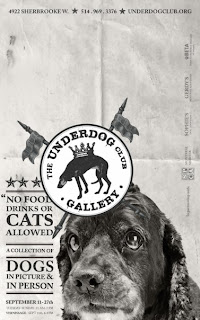 I was also sent a link to a really neat Facebook group - it's called "The Underdog Club" - and its out of Montreal - and they've got some fantastic advertising posters for an event that's happening in September. 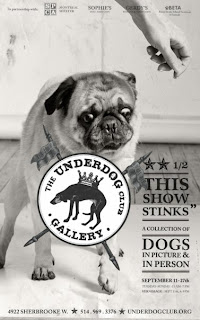 This is what it says about "The Underdog Club" -"THE UNDERDOG CLUB is a private organization dedicated to finding special owners for hard to place dogs. Whether old, ugly or simply unpopular, these dogs can’t compete with purebreds or puppies and often go unnoticed at local shelters. The members of the club are not for most, which is what makes the Club so exclusive. And while most will want nothing to do with such undesirable characters, a small handful of people will see something that the others have missed. Welcome to the underdog club." 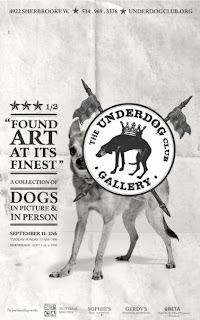 And the event they're putting on in September is as follows: When most people hear the words “art” and “dog,” the iconic image of the furry friends playing poker might come to mind. A local Montreal not-for-profit organization is putting a new spin on canine culture this September by organizing one the city’s first-ever animal adoption art galleries. From September 11-27, 2009, the Underdog Club, an organization spearheaded to help find homes for hard-to-place homeless dogs, is hosting the Underdog Club Gallery at 4922 Sherbrooke Street West. 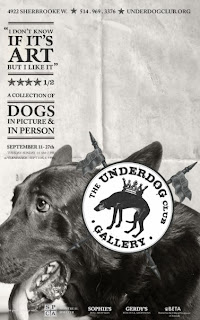 The Underdog Club Gallery will be an interactive experience designed to educate Montrealers about animal abandonment, raise funds for local animal rescue organizations and help hard-to-place dogs find homes. The Gallery will feature a collection of dogs both in pictures and in person for people to greet, play with, and, hopefully, adopt. The dogs selected for the gallery are the “Underdogs” - ­ the older, uglier, less-popular animals that are overlooked day after day in local shelters.
Posted by Joan Sinden at Monday, August 24, 2009