The very dismal court decision from the animal abusers Zonda MacIsaac and Alice MacIsaac is now available online for us all to go look at and feel very sad about. It's at http://www.courts.ns.ca/decisions_recent/documents/2008nspc81.pdf - did you also know that animal abuser Zonda is also on Twitter? I guess everybody's on Twitter now - her profile is at http://explore.twitter.com/jbloake - she's also on Facebook if you want to add her as a friend or send her a message.

The document is pretty awful. It is basically the sentencing of the MacIsaac's and it gives no justice whatsoever to the animals that were abused by Alice and Zonda. It gives no acknowledgement to the suffering that went on - there is no deterrent factor at all to anyone else who does what they did to dogs and cats.

And it puts it all off on to the fact that Zonda and Alice were "so successful at rescue" that it just became too much for them - so they had no choice but to not show up at the kennel for days and days at a time to feed or water the animals or give any of them any attention. Can you imagine?

Here is what it actually says -


[22] Counsel for Zonda MacIsaac advised the court that her client cared very much for animals and had taken extensive efforts, including utilizing her personal resources to rescue and save animals and then place them for adoption.

[23] As a result of prior mental health issues and marital problems, Zonda MacIsaac developed persistent symptoms of depression, anxiety, inability to concentrate and short term memory loss. These pressures, and other general pressures in the community, resulted in her having a major depressive disorder over the last two years. While Defence counsel acknowledges that the animals in the care of her client were “distressed” as defined by the Animal Cruelty Prevention Act, this was not done intentionally. Defence Counsel describes Zonda MacIsaac as a sensible, caring and good person, especially when it comes to the treatment of animals in her care.

[24] Defence counsel acknowledged that her client became overwhelmed by the number of animals that she was attempting to care for, and in a sense became a victim of her own success by taking in many more animals than she could properly care for, especially given the mental health condition in which she found herself over the last two years.

[25] As for Alice MacIsaac, Defence Counsel indicates that his client is 64 years old and also comes before the court with no prior involvement in the courts. In essence, Defence Counsel points out that Alice MacIsaac, as the mother of Zonda MacIsaac, got involved in these matters to assist her daughter and to relieve the stresses associated with the financial, marital and mental health issues that her daughter was facing.

[26] Defence Counsel indicated that SPCA Officers conducted their search at a certain point in time, but there may have been explanations other than neglect to explain why there was no food or water visible when the officers arrived. Defence Counsel acknowledges that the charge facing Alice MacIsaac is one of strict liability and that she did not exercise due diligence with respect to each and every one of the animals found on her property when the SPCA Officers arrived. Like her daughter, Alice MacIsaac was a victim of her own success and the more animals that she rescued, the more she felt the need to take in and rescue even more animals. At a certain point, the numbers involved were greater than she could handle and the situation became too difficult to manage.

So in other words - because she was so successful - she was a VICTIM of her own success. The animals weren't victims - the HUMANS were victims - and there were explanations OTHER THAN NEGLECT for what was going on. 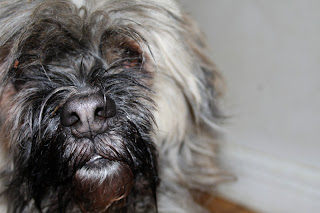 My dog Jack went up to Alice MacIsaac's house with TWO EYES and came back to Halifax with one eye because while he was at Alice's house he got an ulcer on the eye - it exploded - and the eye receded and disappeared back into the eye socket. His nails were so long that they had grown all the way around and had become EMBEDDED in the pads of his feet. A year and half later his nails are still round instead of straight. What explanation other than willful neglect could there be for that? 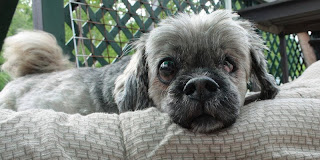 That is disgusting and inexcusable. 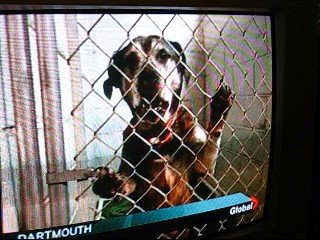 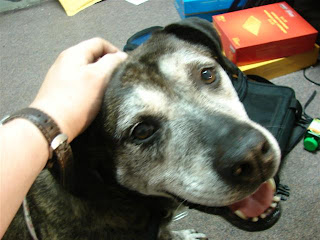 [13] As they entered the backdoor of the residence there was a strong ammonia smell and loud barking from the dogs. Some dogs were kept in wire kennels in the livingroom while other dogs and cats were running loose. In one bedroom was a beige dog who could not walk and that dog was lying in his own faeces. SPCA Officers indicated that there was no water available for the animals. Several dogs’ hair and fur was matted with urine and faeces. In total 24 dogs were loaded onto trucks and removed from the property. Three dogs were taken to an animal emergency hospital and the dog who could not walk was euthanised on site. It was the SPCA Officer’s opinion that the dogs were filthy and that they were in need of adequate care, food, water and shelter.

There is a dog in this report we've never heard about before - there was a dog so sick at Alice's house that as soon as he received medical treatment - he was put down. So Alice was keeping a dog at her house who was in so much physical anguish - he should have been put out of his misery - and she was keeping him alive for some reason - why? We'll never know - maybe she just likes to watch animals writhe in pain. I guess that's what animal abusers like to do.

At least for the next 19 or so years - they'll only get to do it to one animal at a time.

To see all my posts on this debacle - you can click on my category - "Celtic Pets"
Posted by Joan Sinden at Tuesday, June 16, 2009