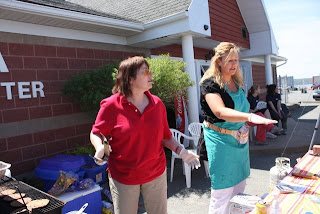 So today was the long awaited open house and yard sale for the Metro SPCA shelter - and by all accounts it was a great success - the barbecue that was going on made a good chunk of change, and I'm sure the yard sale did a good job too. 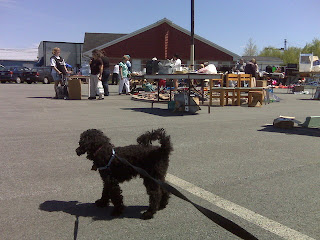 Bobby had a good time - he was very well behaved and got along with all the dogs he met which was great. He was just loving the attention, I think. 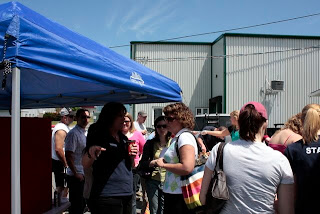 As you can tell - the turnout was great - lots of happy people, and happy animals - hopefully some great applications got put in today as well. 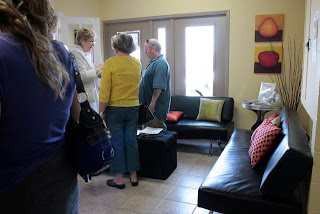 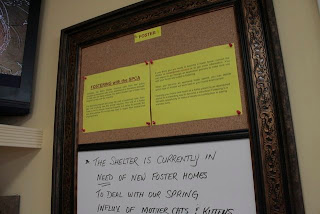 like instead of pieces of paper on the wall as signs - they have great bulletin boards inside beautiful frames - really nice touches like that - that will make a big difference over time when there aren't holes in the wall and tape tears in the paint. 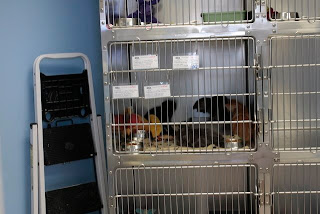 I only went in as far as the entrance way since I had Bobby with me - but I did get a nice look at this litter of very cute kittens playing - they didn't even seem to notice all the hull-a-baloo going on around them! 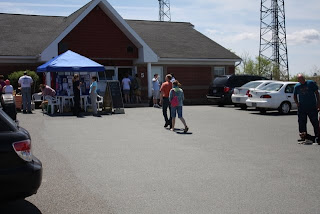 A long shot of the crowd 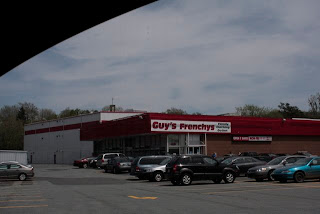 I was in there for about 45 minutes with no problems, minding my own business, Bobby's feet never touched the ground, probably about 5 people approached me because he was so cute and 2 people came up to me because they thought he was a stuffed animal - one person was at me for about 10 minutes and insisted I take her email address because Bobby was exactly what she was looking for and she wants me to email her if I ever see anything come through rescue that's like him - so it was a good educating time for rescue stuff - and about 45 minutes into my shopping this person comes up to me and says - "you can't be in here - there's no pets allowed" - and I say "why?" - and the woman says - "people in here might have allergies" - and I look at my hypoallergenic toy poodle and say to her "do you allow people in here who wear perfume?" - and the womans says "yes" - and I say to her "then that excuse is not good enough, you're going to have to think of a better one".

That person walks away - and another one comes up and we go through the same routine and I say - "I've been in her for like 45 minutes, what's the problem?" - and the woman says "I just came on the floor now" - so I say "well, I'm almost done shopping anyway", so I keep walking - which is pissing off this girl royally (which isn't bothering me at all and I'm trying to draw out for as long as I can) - and she's staring at me, and I say to her - "are you going to let me buy the things I'm carrying around?" and she says "yes" - so I start ambling over towards the cash register and she follows me there and rings me up and I say to her "you should let people bring their dogs in her with them, you'd get a lot more customers". And I take my ill-gotten gains and leave.

So that was the first and last time I'll be going to Guy's Frenchies on the corner of Tacoma and Hartlen in Dartmouth - I wish I would've noticed the Salvation Army just around the corner - they probably would've been a lot more friendly. I was originally going to go back to the Value Village on Portland but thought it was too far to drive to - but I know better now.

Some of us got together and made a video in appreciation of what the staff and volunteers do everyday at the Dartmouth shelter - we went downtown last weekend and video'd some people saying thank-you for what everyone does, and we went to the shelter and video'd the animals saying thank-you - and this is the video we came up with - I originally uploaded it to You Tube, but You Tube has gone nuts with disabling audio because of the music you put on with the video's - so I'm going to try and see if it works just attaching it to this blog post - hopefully the audio won't be disabled by blogger - we'll see how it goes - enjoy!

Email ThisBlogThis!Share to TwitterShare to FacebookShare to Pinterest
Labels: NS SPCA, stuff to do coming up, Videos