Legal off leash spaces I didn't know about!

It always helps to surf the HRM's website, I guess - I thought I knew where all the legal off leash spaces were in the city - but I have realized that I didn't.

I had an email from a reader of my website asking if I knew of any completely fenced in areas where she could run her dog, and I sent her a couple spots - but I went to the HRM's website to have a look around - which by the way, is becoming very outdated, because everything is from 2007 and 2008 - so hopefully nothing has changed - because nothing's been updated it seems in almost a year - and for some reason I've never clicked on the "Summer Off leash Sports Fields" section.

There's seven of them - and they're quite well spread out around the HRM, and one of them is even hear where I live - so if I wanted I wouldn't even have to break the law on a daily basis! haha! 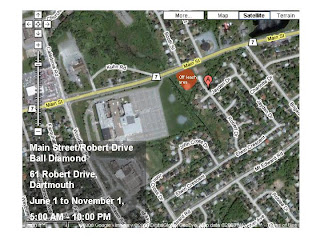 The most emails I get are people asking me about fenced in places to take their dogs off leash - and Robert Drive Park in Dartmouth is probably becoming the best known and best used park for offleash dogs that I know of - it's completely fenced in, and the users of it have even created their own facebook groupRobert Drive Park 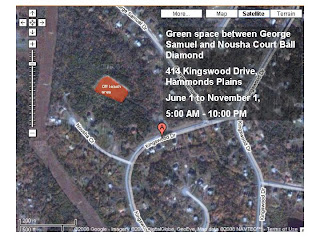 Hammond's Plains also has been given their own off-leash space

with the green space between 2 ball fields on Kingswood Drive 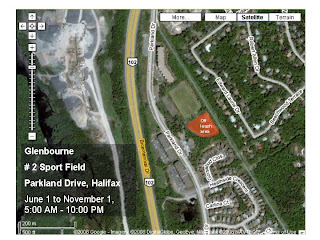 In Clayton Park there is Glenbourne Field on Parkland Drive 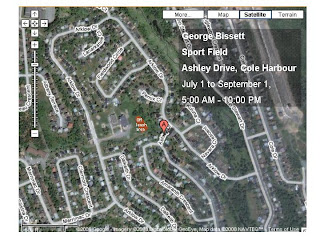 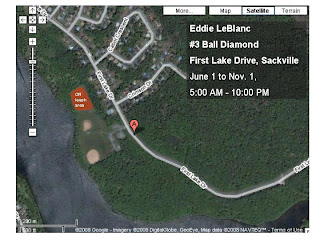 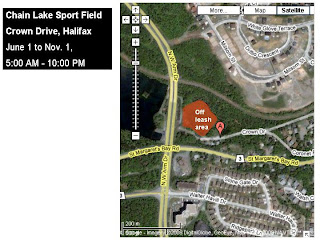 The field that's where I live by is on the Crown Field off the North West Arm Drive - I had no idea it was off leash! 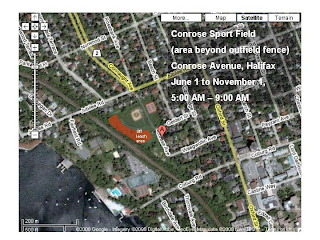 And last is Conrose Field right off of Jubilee Road in South end Halifax - another field I had no idea was off leash.

So that has totally added to my retinue of places to go off leash - none of them are sniff and pass type places - but they're all great for finding other dogs to wrestle with or play with balls or to practice obedience or just hang out and have fun off leash. And they're applicable 5am to 10pm from May 1st to November 1st - with the exception of Conrose, which the website says is only available between 5am and 10am, which sucks.

Another thing I wanted to talk about which started up recently is a new message board/online presence for local people - and it's called "Halifax blogger" - and it has a section for dog friendly postings. The dog friendly section is at http://halifaxblogger.com/blog/phpBB3/viewforum.php?f=19 - the board is open to suggestions for what's going to be there - but posting of dog friendly events, your experience with dog friendly Halifax - and conversations about creating a dog friendly Halifax are all ideas about what we could talk about there. The main site is at http://halifaxblogger.com/ - so go check it out!
Posted by Joan Sinden at Monday, May 25, 2009

Email ThisBlogThis!Share to TwitterShare to FacebookShare to Pinterest
Labels: Dog Friendliness, off leash