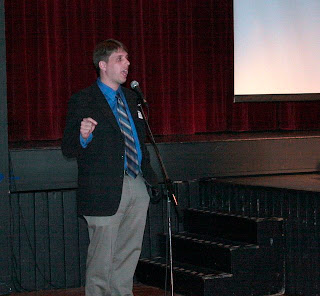 Meet the new President of the Nova Scotia Society for the Prevention of Cruelty - Sean Kelly. The new Vice President is Kat Horne, the secretary is Mary Hill, and they also announced that an Executive Director has been hired and his name is Todd Muelek - and his credentials sounded very impressive. 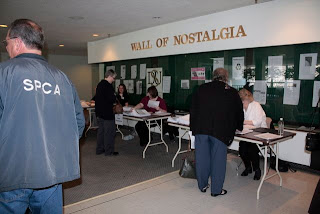 Today's Annual General Meeting was an AGM like no other - and as each person rose to speak they made note of it. Every body - from Board members to voting members of the Society said that the things they were talking about, the give and take of the conversation - would not have been said at the AGM last year. 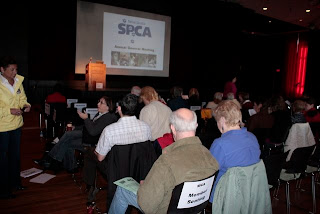 Board Member and Treasurer Jim Kochanoff said that in his 4 years on the Board that today's presentation and meeting at the AGM was the most organized and professional that he's seen and he was really impressed. Bert Vissers who is the representative on the Board from the Department of Natural Resources echoed those comments and said that compared to previous years the past 12 months work of the Board and the transparency that has come to the Society has been remarkable. 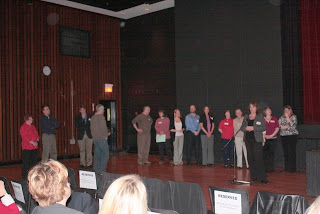 One of the really neat things they did this year was the way they included all the Board members - it wasn't just the President nattering on and on up at the front of the room - they had every Board member stand at the front and say what it was they were most proud of that the Society - and they in particular - had accomplished in the last 12 months. And that was really interesting because it really showed that there are a lot of people now coming to the table and bringing their own views, ideas, and work to getting the job done - and also that there are a lot of people who have their own finished and partially finished projects to brag about. Which is fantastic. Previously the Society was held by the balls by a very few people - and now the membership can really see that volunteerism is really being embraced by the people at the top - that they have really embraced the transparency that had only been talked about previously. 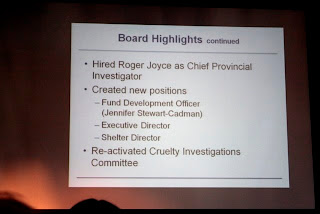 Mary Hill gave a really good and thorough power point presentation of all the great things that have been accomplished in the last year, and I took photos of a couple of the slides that interested me the most. 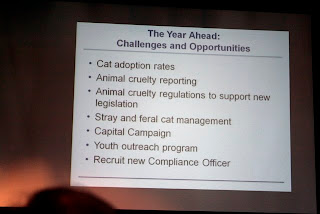 Their plans for the next year are interesting - to increase their cat adoption rates - which are currently only at about 45% province wide, which they think is pretty bad. I think that in previous years they didn't even know that it was that bad because they didn't have standardized reporting across the province - so now that they know how bad they're doing - now they're going to actually do something about it!

Another interesting thing Mary said at this point was about animal cruelty reporting - that in New Brunswick about 6,000 calls are put in to the NB SPCA about cruelty complaints whereas here in Nova Scotia the NS SPCA only gets about 1,200 calls. Why are there so few people calling in about animal cruelty? Why are people under reporting animal cruelty in our province? Is it because there's less people treating animals cruelly? Or is there something else going on. That is something we need to figure out.

As well - in the next year the NS SPCA is going to need to deal with (I'd imagine happily!) spending the $100,000 that's been given to them by the department of Agriculture to enforce the new animal cruelty and prevention act, and the regulations within it - which will be very exciting. 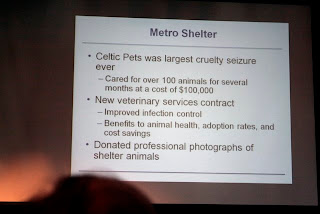 The next 3 slides are about the Metro Dartmouth shelter - and if you haven't been there lately - if you go there you are going to be absolutely blown away - it has moved from the 19th century to the 22nd century. The photo below is a picture taken INSIDE the shelter. 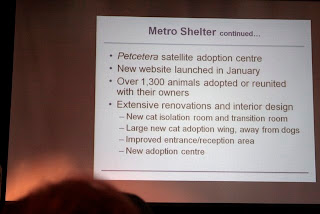 They have created an adoption centre where you can meet the cats that is next to the reception area - that used to be where all the cats were kept - remember how you used to have the reception area, then to the left was the cat room you had to go through to get to the dogs? Well - that is all gone. It is unbelievable. It is so beautiful. I didn't get all the names of the people responsible for this transition - but when I do - I'll post it - they deserve a lot of recognition. 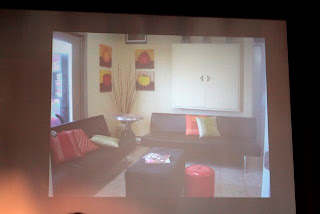 This is a slide of one shot of the room - and on that note - at the AGM they announced that the Dartmouth Metro Shelter is going to have an Open House to celebrate their newly renovated and improved operation.

It's going to happen Saturday May 23rd from 12-2pm at 5 Scarfe Court in Burnside. There's going to be prizes and giveaways - and if you want to see a building that's been transformed - you should go check it out. It is a symbol of how the NS SPCA has transformed itself in the last year.

One interesting question was asked that I thought I'd follow up here - the question of who the Board answers to - because in previous years that was the problem - there was no one that the Board answered to, and they could do whatever they wanted - appointing new Board members, not having to, seemingly have elections - or do anything that the membership wanted them to do. And that was one of the things that Bill 186 changed - the minister of Agriculture now has the power to dismiss the Board of Directors of the NS SPCA - previously, he did not have that power - but with the new Act - he now has that power. So the Board now DOES have to answer to the Minister. So if the last several years pain did anything - at least it did that - it gave the Board someone that it now has to answer to - and that's the Minister of Agriculture. It can still blow off the Compliance officer if it really wants to - but it can no longer blow off the Minister of Agriculture.

Today's AGM was like no other - everybody in that room could feel it. All the things that people have been saying for the last year has finally manifested itself. Good things are happening and it can now NOT be stopped. Like Will-I-Am says - "It's a New Day". It certainly is - and thanks to the new Board - it's going to continue on now - and nothing can stop them. So many lives are going to be saved.

And to save a couple things for the last - Mel Neville announced that the C02 machine at the Cape Breton SPCA has been destroyed - they are now killing animals by other means. And he actually seemed happy about it. And he seemed happy to be at the meeting today too. Which was lovely to see. It looked like he felt he was among people who liked him. Which he was.

I also wanted to comment about the fact that no one showed up who had been threatening to show up and be combative and provoke questions to the Board. It's so interesting how people can be so bullyish and spread so much hatred on the internet and say they have so much support and do so much on the computer and then in the real world, in real time out there where people actually exist - nothing ever happens, no one ever shows up - nothing ever sees the light of day. That to me says so much. Internet websites and blogs mean nothing - and the things they say mean absolutely nothing if you're not willing to show up in person in your human form with your human face and actually do something about all the things your shouting about in your facebook groups and anonymous commenting and your silly hateful blogs. Period.

I was there. Lots of people were there. Where were all of you?
Posted by Joan Sinden at Saturday, April 25, 2009