Gail Benoit faints at the prospect of going to jail

Today's Chronicle Herald article has a very interesting line in it -

"it was determined during last year’s trial that the puppies weren’t owned by the couple but were merely possessed for the purpose of selling them."

The prosecutor said that - and that's the reason they couldn't ban Gail Benoit or Dana Bailey from owning animals - because the animals they abused weren't actually owned by them - they only "possessed" them long enough to sell them.

I find that really interesting, because in order to sell something - wouldn't you have to be the legal owner of it? In order to sell a car - don't you have to own it first? I know that when I bought my car last year from Cars 'r Us they had to sign it over to me - they legally owned it according to the Nova Scotia Government, and I had to wait like 2 weeks or something before I really legally "owned" my car. Papers were sent to me in the mail. How can you just "possess" something until you sell it? I thought that animals were property? Why now - in the case of animal cruelty - are animals being treated differently than any other kind of property?

I am certainly not a lawyer - but this has really confused me. And did you notice on the news yesterday that the Benoit's lawyer wanted to make it absolutely clear that the Gail Benoit was not going to jail on any of the animal related charges - she is going to jail on the assault charge - the only punitive thing that happened to her and Dana Bailey in relation to the cruelty charges were fines. And they were pretty hefty - over $1,000 for each of them.

Thank dog that Gail is a violent person or else yesterday's outcome would have been a lot worse - she treats humans as poorly as she does puppies - so at least she's getting punished for something. You could almost call it a "Paul Newman punishment".

Paul Newman got an oscar for the movie "The Colour of Money" with Tom Cruise - not really an oscar worthy movie or performance - but he'd had a long and distinguished career and really deserved an oscar at that point in his life - so they gave him one for that movie in that year. So when someone gets an accolade for something that they really deserve but it didn't really seem like they deserved it for that actual thing - I always call it a "Paul Newman (.....)" - and this sentence would seem to fit the bill. Whatever works. Ms. Benoit is going to jail. Some discomfort is coming to her life.

Puppy broker faints at prospect of going to jail 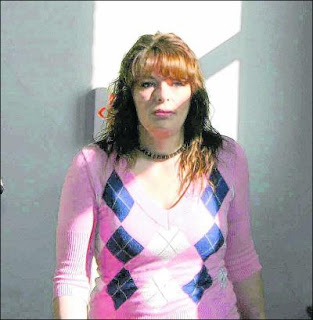 Gail Benoit, will spend the next 21 days in jail for resisting arrest during the 2007 seizure of 10 puppies from the Digby County puppy broker’s home. Her sentence angered partner Dana Bailey, above. He was hustled out of Digby provincial court Thursday after he began yelling profanities and threats. ’How could you do that? This is not fair,’ he shouted to Judge Jean-Louis Batiot. (Brian Medel / Yarmouth Bureau) 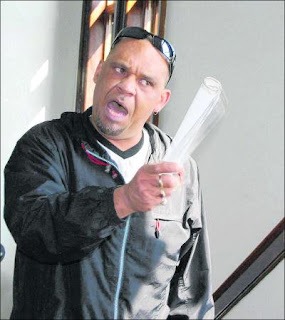 DIGBY — Gail Benoit, a Digby County woman accused of selling sick and dying puppies, slumped to the floor in Digby provincial court Thursday after she was sentenced to 21 days behind bars for resisting arrest.

Upon hearing Judge Jean-Louis Batiot say that she was headed to jail, Ms. Benoit glanced quickly to her right, then fell, rather slowly, to the floor.

Some in the audience laughed while others smiled as they watched two sheriff’s deputies try to help the woman.

"If my wife chokes in that jail, you fellas are going to be held responsible," Dana Bailey hollered, at one point addressing his remarks to "Mr. Batiot."

"How could you do that? This is not fair," he yelled at the judge.

Police and sheriff’s officers hustled Mr. Bailey out of the courtroom, pushed him out the front door of the courthouse and told him to move along. His wife, who had recovered by then, was then led away to jail.

In the fall of 2007, a search warrant was executed and 10 puppies seized from the couple’s home near Digby.

Crown attorney Rosalind Michie said Thursday that Ms. Benoit and Mr. Bailey have sold as many as 30,000 dogs in the past 13 years, sometimes selling 200 in a month.

Some people who have bought puppies from Ms. Benoit have complained to the provincial SPCA that the dogs soon died.

Ms. Michie also told the court that this is Ms. Benoit’s third conviction since 1994 for assaulting a peace officer.

"The Crown takes that very seriously," she told Judge Batiot.

She said Ms. Benoit and Mr. Bailey, who called themselves puppy brokers during their trial last year, have never accepted responsibility for their actions.

"All along, nothing has ever been their fault," Ms. Michie said. "There is no expression of any remorse."

The prosecutor said after court that she "would have liked to have seen a prohibition of (owning) animals" placed on the couple. But she said that under the Animal Cruelty Prevention Act, ownership of an abused or neglected animal is required for such a ban to be implemented, and it was determined during last year’s trial that the puppies weren’t owned by the couple but were merely possessed for the purpose of selling them.

Defence lawyer Michael Power said the level of neglect of the puppies was rather low. Although the animal cruelty charges dealt with 10 dogs, he said there is evidence that hundreds of dogs have passed through his clients’ care, the majority without complaint.

Mr. Power said Mr. Bailey, who turns 47 next week, is disabled and receives $869 a month from the Workers’ Compensation Board. Ms. Benoit, 39, also is disabled, the lawyer said, and gets $830 a month.

"They are not bad people. They are business people," Mr. Power said.

He said their puppy brokerage has been hurt by negative publicity.

"The business is basically in limbo now," he said.

Mr. Power also told the court that his clients sometimes speak their minds too freely in public.

"They blurt things out," he said.

"I’ve admonished them . . . I’ve told them to quiet down those emotions. But they do become emotional."

Ms. Benoit and Mr. Bailey must also pay $2,478 in restitution for care and treatment of the sick puppies, and Ms. Benoit will be on probation for 18 months.
Posted by Joan Sinden at Friday, April 10, 2009