Some more about litter and poop

I had an email last night from Chris who has been going to Lewis Lake Park and with the melting snow all the dog shit that's been accumulating all winter is suddenly becoming apparent all at once and he was talking about how disgusting it is.

I've written quite a bit about dog shit and parks here on the blog ("what's the difference between litter and poop" and "what to do about the poop") because I've got pretty strong feelings about bureaucrats trying to take away dog owners access to public space because of some irresponsible dog owners not picking up after their dogs - and right now with the winter's snow melting all at once - which happens every year, 6 months worth of dogs' shit is all becoming apparent in every corner of the HRM and beyond.

I liken dog shit to Tim Horton's cups - people throw them away everywhere - and you see them everywhere, but you'd never consider shutting down any Tim Horton's coffee shops because of people throwing away their cups irresponsibly instead of putting them into garbage receptacles. Simply because you can assign a niche demographic to place blame on - does not mean that you can shut down access to public space to the whole of that demographic for the irresponsibility of a small minority.

That is completely wrong - and non-sensical as shutting down every Tim Hortons because of their cups being thrown away on street corners. It's exactly the same thing.

I say this because there was an article in today's Metro newspaper about litter - and that the city has issued a "friendly reminder" about it. If you look around the city right now - it's pretty disgusting - there's garbage everywhere because of the melting snow - so it's not just about dog shit in the parks - there's litter and garbage everywhere. And dirt, and just general grunge. I feel sorry right now for anyone who's visiting our city for the first time - they aren't getting a true vision of what Halifax looks like - or maybe they are, maybe this is what our city has become, I don't know - but it's pretty gross. Nothing but plastic bags, Tim Horton's cups, dog shit, dirt, gravel, paper towel, styrofoam containers, and dog shit. 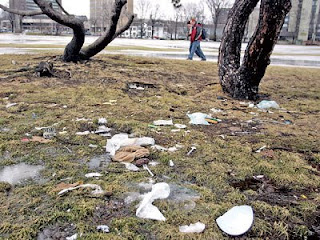 A pile of garbage sits on the Halifax Common yesterday.

That’s the message the provincial Department of Environment is sending to Nova Scotians in a new campaign.

Sounds crazy, doesn’t it? That’s what they think, too, and that’s the impact they want to have on anyone who will listen.

“Everyone knows this is wrong, so why is litter up?” environment department communications adviser Janet Lynn McNeil said.

“Litter has gone up 21 per cent from four years ago. Those numbers were really disappointing and shocking because people have been more environmentally friendly recently.”

That may even be part of the problem, she surmised.

“In terms of environmental issues, litter has fallen off the radar. We want to make sure people pay attention ... We are asking all Nova Scotians to pledge not to litter.”

That pledge can be taken at the website www.bestthingyoullneverdo.ca.

McNeil refers to the month-long campaign, which started Monday, as something “bold and innovative” for the Department of Environment.

“It’s really up to all of us to do something about it ... Sometimes we just need a friendly reminder. That is why we did the survey. It’s a call to action.”

The campaign will feature the radio spots across the province as well as large posters on bus shelters in areas with public transit.
Posted by Joan Sinden at Thursday, March 05, 2009