Wow, we find out today in the Chronicle Herald that Gail Benoit actually THREW A PUPPY at SPCA investigator Nancy Noel in October 2007 when they were at her house investigating complaints of animal cruelty and ended up seizing 10 puppies that were malnourished and full of parasites. THREW A PUPPY at someone.

When was the last time that you THREW A LIVE ANIMAL - or A BABY at another person? That shows how much care and consideration that she had for the animals she had in her care. Wow, that just blew me away when I read that today. Shit.

I have also updated my Gail Benoit page so that there are links to the updated You Tube videos and news articles that have come out in very near past - so it's currently up to date with their goings-on.

The next court date for the couple with their current animal cruelty charges is February 16, 2009 - thank you to "Frank Chase" for keeping such good track of all the court dates and the Facebook group Stopping Puppy Mills and People like Gail Benoit and Dana Bailey for their tireless work - hopefully some of the puppies that have died haven't completely died in vain because of the work they've done 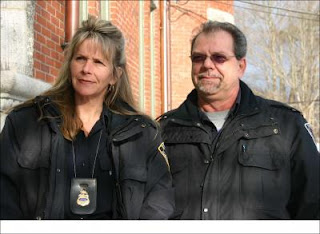 SPCA special constable Nancy Noel, seen with her colleague Roger Joyce outside Digby provincial court on Thursday, says Gail Benoit threw a puppy at her, stepped on her foot and shoulder-checked her in 2007. 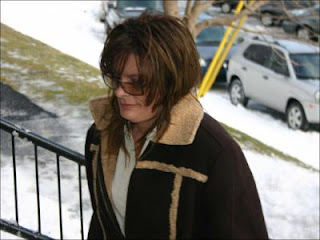 DIGBY — A Digby County puppy seller convicted of animal cruelty and assault Thursday launched into a tirade against the judge who handed down the decision.

"I find you guilty," Judge Jean-Louis Batiot said to Gail Benoit, 39, as she stood beside her husband, Dana Bailey.

"I think that your decision is . . . ludicrous," Ms. Benoit shot back at the judge before denouncing her treatment.

Judge Batiot told her to take it up with her lawyer, raising his voice to be heard.

The lawyer for the couple, Michael Power of Bridgewater, was unable to attend court because of poor weather.

Ms. Benoit and Mr. Bailey were tried last year on charges of animal cruelty stemming from the seizure of 10 puppies from their Roxville home in October 2007.

Ms. Benoit was also charged with assaulting SPCA investigator Nancy Noel while the dogs were being taken during the execution of a search warrant. Ms. Benoit was convicted on that charge Thursday.

Outside court, Ms. Noel, an SPCA special constable, said she was at the couple’s home in 2007 when Ms. Benoit suddenly chucked a puppy at her.

"She threw the puppy at me, then she stepped on my foot and shoulder-checked me," Ms. Noel said.

The couple operates a business, Puppies R’ Us, that is listed on a government website as a partnership involved in the retail sale and delivery of puppies.

The address of the couple’s blue bungalow is the same address given for the puppy company.

Some people have complained to the SPCA about puppies they have purchased from Ms. Benoit. Some of the young dogs died soon after.

Judge Batiot did not read his written decision publicly Thursday but made sure the couple received a copy.

They are expected to be sentenced March 26.

As Judge Batiot announced his decision, Ms. Benoit seemed to have a hard time accepting her fate.

"This is going to be all over the Internet," she said, interrupting the judge.

Ms. Benoit also brought a couple of letter-sized sheets of paper and waved them toward the judge.

"This has got to stop," she said, reading "wanted . . . dead or alive" from one of the pieces of paper that appeared to be a mock wanted poster of Ms. Benoit.

When the judge told her to talk to her lawyer about it, she turned on her heel and left with her husband.

"Everybody beware. The SPCA are corrupt," she warned courtroom observers.

Mr. Bailey also indicated he was not interested in returning to court.

"There will be no sentence date," he said loud enough to be heard in the public gallery as they left in a huff.

Roger Joyce, another SPCA investigator in court Thursday, said his organization will push to ban the couple from owning or keeping animals.
Posted by Joan Sinden at Friday, January 30, 2009