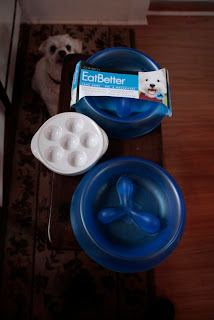 Jack is a voracious eater. When he was at his previous home - the animal abuser Alice MacIsaac - mother of animal abuser Zonda MacIsaac - he had to compete with 40 other dogs for his food - so one of the lingering effects of living there is that he's quite food aggressive, and when he gets his food he tries to get it down his gullet as quickly as possible so he can go visit the other dogs and try to steal their food.

I had seen those "break fast" bowls at Bark & Fitz - but they were like $40 or $50 and I was like - I just CAN'T bring myself to pay $50 for a dog bowl. I got to thinking about it - what would work as a bowl that's similar to that that would work, and what I came up with was devilled eggs bowls - which is what is in the middle of the above photo - and they've worked quite well - but it's a bit small. But they only cost $.99 at Value Village - which is a fabulous price.

Today I was at the Sear's Outlet store in the West End Mall and in the back of the store they've got kitchen type stuff and miscellaneous other things - and they had these bowls there - and they were only $9.99 each! Awesome! So I bought 2 of them - one for breakfast, one for supper. And now Jackie will have a bit of a challenge to beat Daisy and Charlie for time spent eating their meals.