I found this page on the NS SPCA's website today - "Give Me Shelter"
SPCA Says It's Time to Take Your Pets Inside - another press release, this time from November 24, 2008 - and it's all about bringing your pets and other domesticated animals inside when the weather starts getting bad in the wintertime this winter. And it features a dog that was found last winter named Jane. 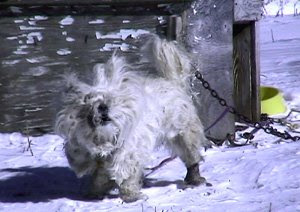 It shows Jane when she was found in King's County last February when it was -42 celcius and she was completely matted and couldn't keep her front paws on the ground because it was so cold and she was freezing to death and her fur was completely stuck together with balsam fur - and it was a fluke that she was even found before she died because no one had even called in a complaint about her. 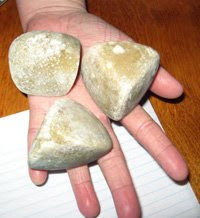 It was lucky though that the Special Constable did find her though - because when she was taken to a veterinarian to be assessed these kidney stones were found inside her - it was obvious that she hadn't had any care for a very long time - so she obviously had been in very serious distress for a long time. 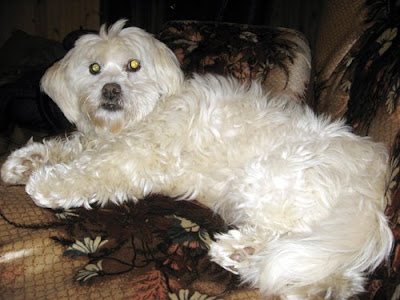 And its completely thanks to the Special Constables and cruelty officers of the NS SPCA that Jane now has a great home and is going to live a long and wonderful life - and has a happy ending - which she never would have had otherwise.

Now that is a fabulous story. And its unfortunately sort of buried - it's a press release, but for some reason - it didn't get picked up anywhere - and to me that's a shame. It even has media contacts at the end for who to contact. I seem to remember that the SPCA has a paid PR person now too - so stories like this should be getting out - because this is a great story and one that should be told - people would give money to an organization that does work like this.

Boston's story too, was a great one. Maybe the NS SPCA should start a blog - I think that would be a good idea - I bet there'd be people willing to set that up and maintain it.

But this is a beautiful way to go into Christmas Eve, with this story - of Jane who was saved, isn't it? She looks so beautiful now. I hope she's having a great life. And I hope that there's a lot of other Jane's out there that will be helped too.
Posted by Joan Sinden at Wednesday, December 24, 2008