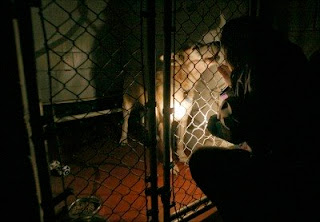 A dog barks at the Metro SPCA which was without power on Christmas Day. The animal shelter had no power for at least 30 hours.

Sick puppies and other animals shivered in the cold at the Metro SPCA on Christmas Day after spending about 30 hours without heat at the Burnside animal shelter.

Some rooms had lights but there wasn't enough power getting into the Scarfe Court building to generate heat for the more than 30 dogs and many cats and a handful of bunnies housed inside.

In an interview barely audible over the howling and barking dogs, Sean Kelly, the chairman of the shelter management team, said he'd repeatedly called Nova Scotia Power to get someone to come out to restore power, but got nowhere.

"We had volunteers come in today expecting to clean a few kennels and help a few animals and instead they were hit with a huge amount of work and seeing the dogs like this. Everyone's just demoralized beyond belief," he said.

About a dozen tall laundry baskets piled high with soiled blankets were lined up in front of two industrial laundry machine sets, while the blanket storage area was almost empty.

Kat Horne, a member of the management team, said the shelter is using more blankets to keep the dogs and cats warm. Two thin-coated American Staffordshire Terrier mixes were shivering in the sick room. They wear coats at night to keep warm, but would have to wear them during the day.

The moans of one particular dog — a large husky German Shepherd mix named Reegan — could be heard from the front entry, even though he was tucked away in the last cage in the isolation room at the opposite end of the building.
"When they can't see, it freaks them out," making a stressful situation even worse for the animals, Ms. Horne said.

"What we really need is Nova Scotia Power to come and do something like they were supposed to yesterday," she said.

There were no Metro-area outages listed on the the power company's online outage page.

She said the shelter's outage was a "one off" and that the crews were focused on larger outages.