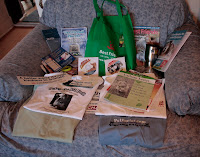 I love having rich friends who go away to conferences - one of my friends just got back from a "No More Homeless Pets" conference put on by the Best Friends Sanctuary in Utah and she brought me back SO MUCH GOOD STUFF! I am agog with all the good junk she got me and all the reading material and links and stuff I've got to go through. I am so excited - and I also got 3 t-shirts and a coffee mug too. There is tons of educational material though to disseminate (er push onto) people too which is awesome. 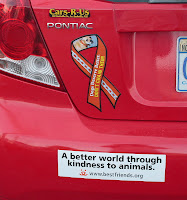 And bumper stickers too! haha! My Dad is going to shit when he sees that I've put a bumper sticker on the actual paint part of my car - but my new car is so little there's no space on the back window for such a big bumper sticker! Oops!

For Halloween tonight I put halloween themed handkerchiefs on Daisy and Charlie, bought a bunch of chocolate - and then only got like 4 groups of kids come to the door - so I'm going to be on a chocolate high for awhile. Yea! I love this photo - look at Jack in the background - he must have been having a head shake while I took the picture!

A good shot of the kerchief...

This is Buttercup being nosy out on the back porch this afternoon...

Jack seems to have turned a final corner and relaxed even more the last little while. He's been playing with his toys like crazy. 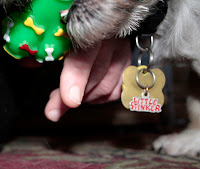 I didn't think that Jack would ever learn to play with the other dogs - he's gotten pretty good at playing with me - with his squeaky toys - but he's never shown any interest in playing with anyone else. Buttercup has tried so hard to play with him - it's so comical watching her - but it seems like finally there's a bit of hope.

I think Charlie was as shocked as I was!
Posted by Joan Sinden at Friday, October 31, 2008