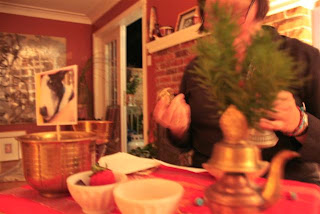 Last night a few of us got together and had a "sukavati" for Janet Chernin's dog Oreo - yesterday it was 49 days since Oreo died - and in the Buddhist tradition this is the time when Oreo will be moving on to whatever form she is going to take next - if you believe in reincarnation. She might be going to another dog, or a bird, or even taking on human form based on how she was in her last life. It's also a way for the people who loved the dead being to release their grasping of the life that's been taken away and they can never get back.

There's a little ceremony that's done and then at the end a photo of the deceased is burned - to signify that the loved one is truly gone and disappeared into the "ether". The ceremony was performed by a really good friend of Janet's who also happens to be someone really well known in the local Buddhist community - Colleen Logan. It was a really neat thing to go to - and Oreo was a really lucky dog to have it done for her, that's for sure. 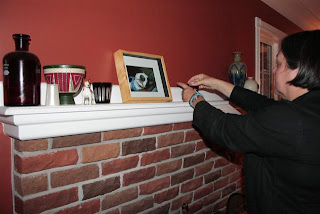 Besides the shrine that had Oreo's photo that was going to be burned - there was an area that had another photo - along with a photo of Janet's other dog who died - Ceilidh, with candles to make everything look nice - and both of their ashes. 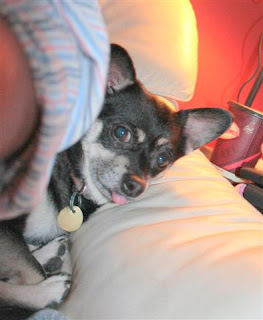 Oreo's sister Sassy decided to spend the ceremony laying behind me for some reason - I guess she feels like she's enlightened enough already! 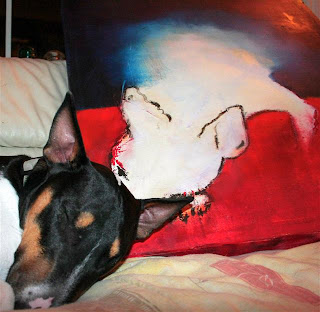 Pickle on the other hand spent the ceremony curled up right next to a painting that Janet had commissioned of a bull terrier that's called "ghost dog" that was right next to the shrine - so she could be right in the middle of everything. 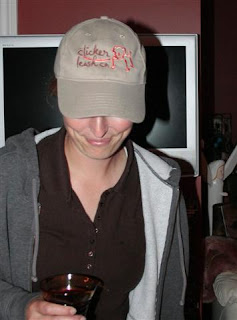 Even one of the most soon to be esteemed CEO's of the Clicker Leash Company showed up!
Posted by Joan Sinden at Thursday, August 28, 2008