In today's Chronicle Herald it says that at least 3 of the puppies Gail Benoit and Dana Bailey sold to the unsuspecting public died of parvo - this was revealed by testing of the dead puppies at the vet college in PEI.

Gail Benoit and Dana Bailey are strongly denying the charge - saying that they were healthy when they were sold and that the media should be focusing on the puppy millers - they only buy and sell puppies - THEY'RE not the bad guys.

When a shelter or a foster home gets parvo - the jig is up - it's a VERY serious situation. The whole place is shut down immediately, every animal is shipped out, the place is quarantined - it's very bad news. Parvo kills.

When I heard that one of the people who had gotten a dead dog from the Benoit's had gotten a replacement puppy just a couple days after having received the dead dog - I was mortified - the first thought that always comes into my mind when I hear about Gail Benoit and dead dogs is always parvo - and I was worried that this lady was just going to pass on the disease to her new healthy puppy. It sounds like she's beaten the odds and her new puppy is still healthy - so all is good there - but parvo is very bad.

Anyway - here's the story - and it's interesting - we've learned some new things here - with #1 being that the Benoit's use photocopied vet records to try and make their puppies look legitamite. That's pretty neat. We hadn't heard that before. 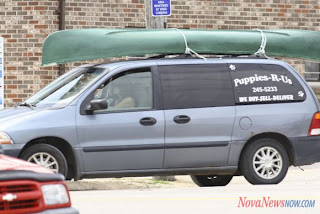 Autopsies: Parvovirus killed pups
Digby woman insists they were healthy when she sold them
By MARY ELLEN MacINTYRE Truro Bureau

Autopsies on four puppies who died shortly after being sold by a Digby puppy broker last month show three died of parvovirus. The cause of the fourth puppy’s death was undetermined.

"The investigation into this case is certainly continuing," Darrell Smith, chairman of the SPCA’s investigations committee, said Wednesday in a telephone interview.

Mr. Smith confirmed the results of the autopsies that were performed on the animals. Parvovirus is a highly contagious canine illness that is often fatal in young dogs.

Alarms were raised late last month after four separate individuals paid between $500 and $650 to Gail Benoit of Digby County in return for the puppies. The little dogs died within days, and in some cases, hours after they were purchased.

Ms. Benoit, who faces unrelated animal cruelty charges brought against her last year by the SPCA, said she bought the puppies from a New Brunswick-based seller.

"If the puppies got any parvo, I’ll tell you one thing, it didn’t come from here," Ms. Benoit said in a phone interview. "Those puppies were healthy when I sold them.

"You guys shouldn’t be harassing me. . . . You should go after the puppy mills because I just buy and sell."

Mr. Smith said Wednesday the owners of Chapman Kennels have been notified of the autopsy results.

The kennel held a sale on puppies last month and Ms. Benoit and her husband, Dana Bailey, of Puppies R Us purchased 27 puppies of various breeds from the kennel.

It is believed Ms. Benoit and her husband paid $125 to the kennel for each puppy.

It’s not known if all 27 puppies were sold.

Ms. Benoit continues to advertise the sale of puppies on Internet sites.

One Charlottetown, P.E.I., woman agreed to talk about a recent purchase she almost made from Ms. Benoit and her husband on Aug. 6. But she doesn’t want to be identified.

"I feel too foolish. . . . I didn’t even read any of the stories about the puppy deaths," she said in a telephone interview from Charlottetown.

The woman made contact with Ms. Benoit after she read an advertisement on Kijiji for a teddy bear-faced Maltese puppy.

"The picture online was so cute," she said. "The puppy was in a straw basket with big sunflowers and it was hard to resist.

"I had agreed to meet her at the ferry wharf in Pictou County and I was going to pay $900 for the puppy."

Ms. Benoit and her husband drove up in a van with a Puppies R Us decal on the side, the woman said.

Ms. Benoit "pulled the puppy out of her purse and put her on my knees and it just looked sick," the woman said.

The puppy had glazed eyes, dirty feet and did not look healthy.

When she expressed her concerns, she said Ms. Benoit handed over vaccination papers.

"I called the office for the veterinarian and the person who answered the phone was very leery and asked me if the papers were photocopied," she said.

"I told her they were and she asked me, ‘Don’t you read the papers’ and then told me ‘Red light.’ "

Although the woman said she told Ms. Benoit she didn’t want to buy the dog, the seller offered to lower the purchase price.

"I had my little nine-year-old sister with me and she was beginning to cry because this woman was so insistent and because my little sister wanted the puppy," said the Charlottetown woman.

"Finally, this guy flew out of the van and started screaming at me," she said.

She alleges Mr. Bailey cursed at her repeatedly.

"They then got in the van and stormed off and I called the SPCA and reported what happened, but it wasn’t until I got home and Googled her name that I found out about the dead puppies," she said.

When asked about the incident Wednesday, Ms. Benoit called out to her husband.

"She was saying you cursed at her," she yelled. Mr. Bailey could be heard denying he had ever cursed at the woman on the wharf.

Meanwhile, Mr. Smith confirmed a report on the incident had been filed with his office.

"Look, this is big business and there is a lot of money to be made if people keep buying this way," he said.

"You can always adopt a puppy at the SPCA or an older dog."
Posted by Joan Sinden at Thursday, August 14, 2008