What to do about the poop problem 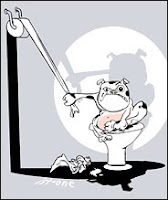 I can't understand why no one has said anything about the fact that Point Pleasant Park and Seaview Park may be closed in a month because people aren't picking up their dogs' poop.

It is baffling me. Has no one read the report that John Charles emailed out last week? It didn't even make it into an article in the Chronicle Herald. Maybe it's because no one cares. Is that it? Does no one really care that Point Pleasant Park and Seaview Park are going to close to dogs because people aren't picking up their poop?

Or are people only going to freak out when the signs go up and they aren't allowed in on a Monday morning in July.

I emailed 2 members of the Point Pleasant Park advisory committee today because they are having a committee meeting tomorrow night to see if it's on their agenda for their meeting and one of them emailed me back and said:

"We'll mention it tomorrow. I think what we all need to put our minds to is how to control the people who do not pick up. Off-leash is a privilege, not a right. Thanks for your email." 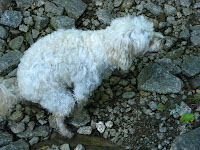 I think she's absolutely right about the idea that we need to control the people who do not pick up - we need to GIVE THEM A REASON TO PICK UP. The City of the Halifax Regional Municipality for some reason has given it's inhabitants no reason to give dog owners compliance for anything - registration, poop pick up, keeping their dog on-leash in on-leash areas, teaching their dogs manners - nothing. They have provided us with nothing. So why SHOULD we do anything? I'm being serious.

And now they are threatening to take away our off-leash spaces because we aren't being compliant. Well surprise, surprise.

What do I think would raise compliance and make people start picking up their dogs' poop?

1. Poop bags at all entrances to Point Pleasant Park.
2. GARBAGE CANS to put the poop bags in - and people to EMPTY THE GARBAGE CANS.
3. City staff in the parks to FINE PEOPLE who DON'T pick up their dogs poop.

Those 3 things would raise compliance by about 1000%. Right now people know that they can get away with not picking up their dogs poop. So why should they? If there's no consequences - there's going to be NO COMPLIANCE. It's pretty simple.

You can put all the flags in poop that you want. But if you don't give dog owners some tools to deal with the poop - you're being VERY disingenous. And unfair.

Maybe nobody DOES care if Point Pleasant Park or Seaview Park closes to dogs. But I care. I hope some other people do as well.
Posted by Joan Sinden at Wednesday, May 07, 2008