The Story of Po 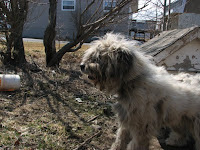 The story of Po is going to be a long one - and right now it's just at it's beginning. Po lived in Cape Breton until yesterday. He'd lived most of his life chained to an empty oil barrel which was next to his dog house. 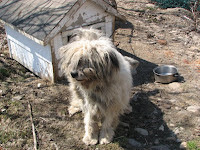 He was hardly fed or given water - and as you can tell by these photos - he was never groomed in his life. When his owners fenced in his yard - they put him on the OTHER SIDE of the fence so they wouldn't have to look at him. Can you imagine that? What kind of people were they. 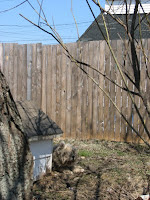 A couple weeks ago a lady by the name of Corinne found out the way that Po had been living his life - she'd been hearing him barking for a long time, but she'd never gone to find him - and when she saw how he'd been living - she couldn't stand it, so she called Animal Control. Animal Control ordered the family to get the dog groomed by a certain date - and instead of doing that - they drove the dog to a road outside of town and dumped him. So Animal Control picked him up and took him to the Cape Breton SPCA where he had a one in ten chance of coming out alive. Luckily - he had gotten some media attention because of this lady - she'd posted the photos she'd taken, and some video of him - which is below - to a local forum down there - at

and the new PO
http://www.capebreton.com/gabZone/index.aro?ForumInfoID=10&VID=1398274

She'd also started a Facebook group at http://www.facebook.com/group.php?gid=16838516125 - so he was getting quite a bit of notice down there, which is a good thing. 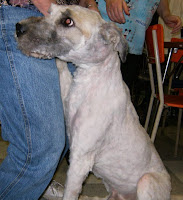 So He was groomed at the SPCA , and some attention paid to him and arrangements were made to get him out of the SPCA and into a foster home. 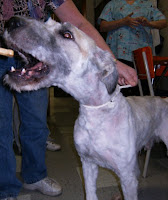 And so he was released yesterday by the Cape Breton SPCA and was driven up to Halifax - and that's where I came in.

I met Rob who drove Po all the way from Cape Breton up to the airport where I met him and Po and I was supposed to be taking Po to his fabulous foster home which was like 30 acres and shangri-la. It would be so wonderful if rescue always worked out that way, wouldn't it? Rob was a great guy though - he said Po was good in the car but had a lot of energy.

Po certainly did look happy - and so skinny! Poor Po! He looks like a mix between an irish hound, a wheaten and a great dane to me - that's my call on him anyway!

This is about the only photo I got where Po was standing still for more than 2 seconds at a time - so I think Po is a fan of the boys. At least he liked this Rob fellow anyway! 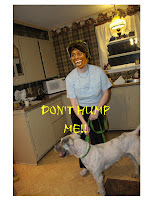 And then on to the "foster" home - within 5 minutes they said it wasn't going to work - you would expect that a dog who's been living for the past 8 years outside, still has his balls, has been in a car the whole day meeting new people, completely out of his element, is starving to death, has just met 2 dogs and is in an environment he's never been in - and also INSIDE A HOUSE, might be a bit stressed - so as soon as we got inside - PO started marking - he peed twice inside the first 5 minutes we were there - and that's about how long we were there. The husband said "this isn't going to work". I was disgusted. I said "I had no idea that you were not committeed to this dog or to fostering. I was of the understanding that you knew where this dog came from and that you would be understanding of his special needs". And all he'd say was "this isn't gooing to work - he's got to go". So I said "fine" - and me and Po left.

To me - people like that don't deserve to be part of the wonderful experience of fostering - because that's what it is - it's a privilege to be part of the awakening of an animals soul as they start to feel safe again - and if they aren't willing to modify their living space even a little bit so that they can accomodate Po's short term training needs - then they don't deserve him. So we left. I told them - anything at floor level is fair game - so if you don't want those photo albums on the floor ruined - you should pick them up. And the woman said "oh no". Like as if - that's where they go - "we can't move them!" As if! Can you imagine! So anyway - I'm sure it was a good thing Po didn't stay there anyway.

But at 9pm on a Friday night? Where do we go? I couldn't take him home with me - my own dogs would've eaten him alive - he was doing nothing but trying to hump me constantly because at this point in the day he was just so horribly overstimulated. That's the problem with formerly chained dogs. They live their whole lives with nothing happening - and then when things start happening around them - they can't handle it - I had the same problem with Daisy - and most people who bring home chained dogs also have the same problems.

There's a really good article about it on the "Dogs Deserve Better" website at http://www.dogsdeservebetter.com/rehab.html - it was one of the articles I took with me to the foster home last night. Too bad they won't get to use the tips.

So I had a brainwave - I called my friend Janet who has an in-home doggy day care in her basement - I'd stay there the night with Po while Netta from Animal Rescue Coalitions - who's taken over the care of Po - found other accomodations for Po. So that's what we did. It was either that or sleep in my car. So everything worked out. Another reason why in-home doggy day cares can come in handy.

So today I took Po out to the place where he's going to be staying until Tuesday - a place called "Boxwood Kennels" - it kind of sucks because it's a place with indoor outdoor kennels - so he's back in a cage until Tuesday.

On Tuesday he's going to get neutered and go to his next foster home for 2 weeks - but then AFTER THAT - he's still going to either need a new foster or an adoptive home.

So Po's journey is just beginning - he still needs a lot of help - and a lot of understanding - but he is going to be a great dog - just in the 12 hours I had him he calmed down SO much. I could tell that he has a LOT of love to give - he's just waiting for the person who's willing to let him give it to him.

That's why I'm posting these photos - these photos I took at Boxwood Kennels - they are pictures of him that I took in his outdoor kennel - when he went in there he completely deflated.

Here he was - out in the rain - and back in a cage. Man, that was hard to do. I really hope that this is just for a couple of days and is only a short blip in Po's hard won new life. He definitely deserves all the sunshine and lolli-pops we can get for him.

Here are the video's that the Corinne lady took of Po before he was rescued:

http://i112.photobucket.com/albums/n183/capercorinne/?action=view&current=poorpo.flv
Posted by Joan Sinden at Saturday, May 17, 2008

Email ThisBlogThis!Share to TwitterShare to FacebookShare to Pinterest
Labels: other people's dogs, rescue