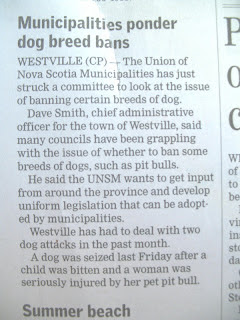 On August 30th, 2006 there was a small side bar article in the Chronicle Herald about the possibility of sweeping breed bans happening in Nova Scotia. I wrote a blog post about it then. And no one seemed to take note of it. Maybe because it just seemed so far fetched - breed banning - BSL all throughout Nova Scotia? Never! That could never happen here!

Well guess what! It's going to happen here! NOW! Henny Penny is not running around saying the sky is falling anymore! Guess what! The sky is actually falling!

And back in 2006 a sub-commitee was struck to start working on it. In late 2007 the following paragraph showed up on the UNSM website:

"UNSM/AMA sub-committee prepared changes to MGA to make dog owners more responsible for actions of their dogs. These changes will give municipalities more tools to work with to address dangerous dogs and their owners. Legislation anticipated to be introduced in Spring 2008."

Well - it is now Spring 2008 - and the legislation is now before the Nova Scotia legislature - and is going to be passed into law very shortly - giving us almost NO TIME to have this bill shut down.

The bill has already passed second reading without any of the public's (read that as you and me) input - this absolutely MUST HAVE a public hearing like the New Brunswick government was courteous enough to give to it's tax paying constituents (and note that the public was AGAINST instituting breed specific legislation in that fair province) - so that the government can gauge whether or not the public even wants this kind of archaic and unnecessary and - unenforceable legislation.

For a list of all the MLA's in the province - you can download this file - here - which has all of them - thanks to Janet Chernin for compiling the list for us.

I went through the actual legislation and typed out the changes the Union of Nova Municipalities want to make, you can view the atrocities here - http://dogkisser.ca/Proposed_newDog_Bylawfor_NovaScotia.pdf - and see what you think.

Janet Chernin has also started a Facebook group to mobilize the troops - it's called "Banned in Nova Scotia? Bill 138" - if you're on Facebook, you should join it.

These indeed are very dark days - as Andrew Younger (Municipal Councillor here in the HRM) said in an email he sent out to concerned dog owners this week notifying us of this impending legislation - this is INDEED a slippery slope the Provicinial government as guided us on to.
Posted by Joan Sinden at Sunday, May 18, 2008