‘A betrayal to rescue’ 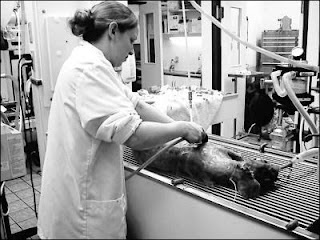 A staff member at the Westwood Hills Veterinary Hospital in Upper Tantallon works on Scupper, one of the dogs seized from Celtic Pets, in February. The work, done free of charge, including removing one kilogram of matted fur. Scupper was among at least six dogs euthanized this week.
Animal lovers are searching for answers after the SPCA confirmed it has euthanized six of the 51 dogs seized in an animal-neglect case.

Pamela Keddy, president of the Nova Scotia SPCA, could not be reached Saturday, but she told CTV News on Friday that the six dogs, which were seized from Celtic Pets in February, were not adoptable.

"They had been presenting the whole time as being very aggressive toward staff," Ms. Keddy said. "We’ve had incidents with at least four of the dogs biting and attacking staff, and the other two had been presenting . . . the entire time as well, lunging and presenting as very difficult dogs to deal with."

Janet Chernin, a former member of the group’s board, wasn’t buying that explanation.

"These dogs did not have to die," she said. 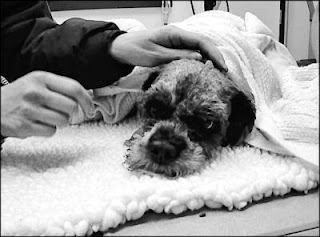 Scupper is anethesized so Westwood workers can remove his matted fur. A rescue group says they found a person interested in adopting the dog, but the SPCA turned her down.

Ms. Chernin said Ms. Keddy called her to help assess the seized dogs as they came to the Metro SPCA from Port Hastings. The owner and operator of a dog daycare said the dogs were "very stressed-out animals that were again placed in concrete cages." Some of them, she said, were aggressive and bit people.

She, like most of those working at the Burnside shelter, is not certified to properly assess the animals.

But from her experience, she said it would have taken "a lot of time and patience" and experienced handling by foster families to turn these animals into adoptable dogs, "but that’s what these animals deserved."

And there were families prepared to take at least two of the dogs as long ago as February. Ms. Armitage said her group found one interested person who was turned down. She said it was because the woman wouldn’t bring her two dogs into the shelter to see if they and the rescued dog, Dottie, were compatible.

A shelter volunteer and dog trainer had offered to take Dottie to the woman’s farm to assess the situation, Ms. Armitage said, but the SPCA turned down the request.

The dog bit a shelter worker on the night he was brought in, she said.

Ms. Armitage, a member of the Nova Scotia SPCA who was called in with Ms. Chernin in February, said once the dog’s matted fur was shaved off, he reacted differently.

"He couldn’t be crated or kennelled, but he was salvageable," she said.

A second dog, Scrumper, was slated to go to another foster home found by the rescue coalition. Ms. Armitage said she had been corresponding with Ms. Keddy to confirm the arrangements had been approved.

"I still haven’t had the guts to call the original owner," Ms. Armitage said. "I haven’t got the guts because she knew we were working to get him (to the foster home)."

Two women — Zonda MacIsaac and her mother, Alice — face animal cruelty charges stemming from seizure of more than 100 animals, some sick and some dead, from Zonda’s shelter during two raids in February.

Both women are to appear in court in Port Hawkesbury on May 21.

In past criminal animal cases, Ms. Chernin and Ms. Armitage said, the SPCA has been required to keep even vicious dogs alive until all court proceedings have been completed. Neither knows why the SPCA wasn’t required to do so in this case.

Ms. Armitage, a longtime SPCA supporter, said she’s tried to keep out of the political side of the organization, which has been the subject of much controversy, including an annual general meeting that was closed to the public and was rife with in-fighting.

But she’s speaking out now, in hopes that those in need are not forgotten. "We’ve got to get back to the animals here," she said. 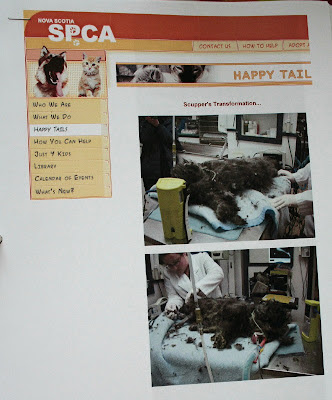 This photos shows a snapshot from the NS SPCA's website on March 10th, 2008 - it's a section of the NS SPCA's website called their "Happy Tails" - it's called "Scupper's Transformation" - and it shows Scupper getting all his matted fur cut off. I'm assuming it was put on their "Happy Tails" section to show the transformations that the Celtic Pets dogs were going through - the rebirth that they were all able to go through now that they were in the caring, loving hands of the NS SPCA.

And now 2 months late - almost to the day - this same dog is dead. Also at the hands of the NS SPCA. I don't know if I would call that a "Happy Tail". For some reason, that link has disappeared fromt he main page of the NS SPCA website. Funny, eh? I wonder how many people gave money when they saw this heartbroken little dog being given a new chance at life.
Posted by Joan Sinden at Sunday, May 11, 2008